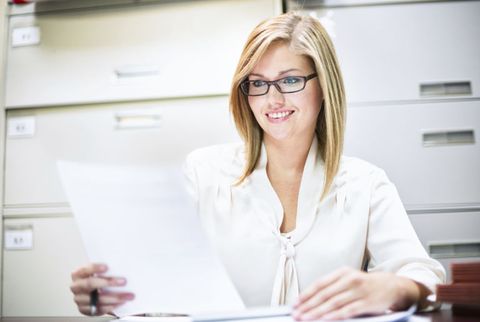 A while back, over kebabs and a hummus platter at a fantastic Mediterranean spot near my office, I was getting acquainted with a recently hired colleague who had all the makings of a new work bestie: She was incredibly well-read and steeped in pop culture, with an enthralling, almost encyclopedic, recollection of every '90s-era TV show that ever aired.

It's so rare that you meet someone utterly in sync with your sensibility and humor that I remember thinking, Wow, this could be one of those relationships—important and lasting. As we were finishing up, she asked what seemed at the time to be a benign question: "So, can we wear jeans to work on Fridays?" I'm that woman with a single pair of Gap boot-cuts that have become my weekend second skin—they're faded and on the verge of ripping at the knees, so I don't dare wear them to work. But ours is a relaxed enough office that jeans are perfectly acceptable. "Sure, yeah, of course," I told her.

Famous last words. That Friday, my work doppelgänger showed up to the office looking like she'd just stepped off the Fall Out Boy tour bus. Her jeans were worn-out, whiskered, and so skinny I could make out the loose change buried deep in her pockets. Paired with a too-small blazer and 4-inch heels, the ensemble made her seem 10 years younger and painfully out of place when we met with our higher-ups later that afternoon. I was startled to see someone so sharp make a fashion misstep so egregious. And yet she made the same mistake week after week. Every Friday, a different fashion crime: sloppy boyfriend jeans, capris better suited for the boardwalk. One sweltering day, she even showed up in shorts. Along the way, my work pal started to feel marginalized—she was passed over for all sorts of plum projects and couldn't get any face time with the boss. A year later, she moved on.

Was my former colleague's experience a product of her Friday faux pas? No, not exactly, but her wardrobe choices revealed a damaging inability to gauge the tone of the office and adjust accordingly. Although jeans were acceptable, her jeans crossed a line. And part of her undoing was that she was incapable of realizing that. "Navigating casual Friday shows how well you understand the culture of your firm," says Laura Lopata, founder of Accent on Image, a New York–based executive coaching firm. "It's one of the many things your superiors are looking at in order to move you up and into a leadership position."

An estimated 55 percent of the nation's companies have some sort of casual Friday policy, either formally or informally, according to the Society for Human Resource Management. Not surprisingly, they're popular with employees. In a recent survey by LinkedIn, in partnership with Marie Claire, 66 percent of female respondents said they liked, even loved, their casual Fridays. Some 24 percent even went so far as to say that the office dress code factored into their job choice.

Casual Fridays were supposed to be a reprieve, freedom from the tyranny of suits. But the problem is that they were designed by men for men. Seriously. Dockers branded the concept in 1992—could there be a more dependable casual Friday ensemble than khakis and a polo? Women don't have the benefit of such a uniform. Last year, when asked how women on Wall Street should dress for work, Sallie Krawcheck, the former head of Citigroup's wealth management unit, responded, "Look to what your boss is wearing." But what to do when the boss is a guy? As women, we've got infinitely more options and scant few role models, which translates into endless opportunities to screw up. If jeans are acceptable, what color? What cut? What wash? "With choice comes angst," says Nicole Williams, career expert for LinkedIn. "While initially the thought of casual Friday is embraced with enthusiasm, the reality of facing a closetful of options is more daunting than expected."

Some industries have women applying an almost Talmudic rendering of what is or isn't acceptable. That's particularly problematic for Millennials, who don't have enough work experience under their belts to decipher subtle sartorial cues. Case in point: Over dinner recently, an old college friend, now vice president at a European investment bank, regaled me with a story about how horrified she was when a fresh-out-of-college junior associate showed up for work wearing open-toe shoes. "Is there some sort of rule about that?" I asked naively. She shot back, "If she's smart enough to work here, she's smart enough to notice that women here don't wear open-toe shoes!"

Geography, of course, is also an important, sometimes complicated consideration. No doubt you've heard how relaxed Silicon Valley is, the Adidas slide-sandal capital of the universe. But it's a different story entirely for women in that town, who, I'm told, have a hard enough time being taken seriously. Which is why I was especially struck by the photos documenting Facebook's infamous IPO last year. There's founder Mark Zuckerberg at the company's Palo Alto headquarters sporting his trademark hoodie, standing beside Chief Operating Officer Sheryl Sandberg, who's wearing a boardroom-ready beige blazer over a black dress. It's true that Zuckerberg's the boss and can get away with wearing anything he pleases, but I wonder how much of Sandberg's ultraprofessional attire—she was also flanked by women wearing jeans and T-shirts—is meant to overcompensate for her company's informal culture.

So what should a savvy professional woman wear on Fridays? "You want to avoid anything that shows more skin than you'd show the rest of the week," advises Alison Green, author of How to Get a Job: Secrets of a Hiring Manager. "Stay away from flimsy materials or anything that looks like what you'd wear hanging around your house." When it comes to jeans, always stick with a dark wash, preferably in a trouser cut. It gets tricky with shoes, especially flats, which for many women are a casual Friday mainstay. I've interviewed countless women CEOs, founders, and top-level execs over the years—not a single one in flats, which exude a kind of demure good-girl quality that rarely telegraphs power. If you're ambitious, with your eyes steadily fixed on a corner office, you'd do well to save them for weekends and stick with pumps or kitten heels.

Or opt out of casual Fridays altogether. That's what I did a few years back after I noticed that none of the top managers in my office wore jeans to work. Ever. So I stopped treating Friday as though it required a separate wardrobe and acted like it was just another workday. Keep in mind that more than half the respondents to the LinkedIn/Marie Claire survey identified the everyday dress code in their offices as business casual—think slacks and a crisp white shirt, a look that works just as effectively on Monday as it does on Friday.

It was only after I ditched casual Fridays that something unexpected happened. Surrounded by colleagues in colored skinny jeans and flouncy skirts, my more formal Friday attire stood out. On a few occasions, colleagues would pull me aside and whisper conspiratorially, "Are you interviewing for a new job or something?" Over time, I got invited to more meetings and took on bigger projects. I even scored a promotion. My formal Friday workwear wasn't the sole reason, of course, but it probably contributed to an air of self-seriousness about my career. I always looked like I had somewhere important to be, and my employers didn't have to work as hard envisioning me in more prominent roles. Fridays used to be such a hassle for me, figuring out how to look like someone who rolled out of bed and into an Ann Taylor ad. Not anymore. Don't get me wrong—they're still my favorite day of the week (aren't they everyone's?), but now they're also one of my busiest.

RULE #1: OPT FOR PIECES YOU CAN WEAR ON MONDAY OR FRIDAY.

RULE #6: SAVE BOLD HUES FOR FRIDAYS.

RULE #7: USE ACCESSORIES TO DRESS IT UP.