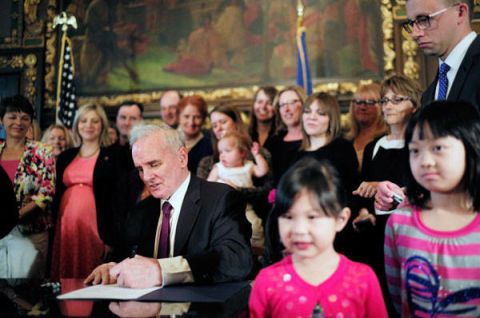 Have you ever considered working in Minnesota? You should. The state's Gov. Mark Dayton signed a series of bills into law on Sunday that aim to improve workplace conditions for women, making Minnesota one of the most progressive states in the country that's battling the gender wage gap.

The Women's Economic Security Act is made up of nine separate bills that will aim to diminish the gender wage gap through pay transparency, increase workplace flexibility, and extend leave for expecting and new parents.

Women in Minnesota make up half of the state's workforce and earn roughly 80 cents on average to every dollar earned by a man. According to Think Progress' Bryce Covert, Minnesota is one of the only states in the country that conducts a comparable pay analysis among all government employees. The new legislation expands the state's current equity analysis to 1,000 private companies that perform contract work with the state government. More specifically, the law requires businesses with 40 or more employees to prove that they are paying men and women equal wages for equal work if they are seeking contracts with the government valued at more than $500,000.

Equal pay advocates maintain that the lack of pay transparency is the number one cause of the gender wage gap that persists today. Research shows that more than 50 percent of coworkers feel restricted in some ways from openly discussing their salaries, and some private companies even have formal policies prohibiting their employees from having such conversations.

This content is created and maintained by a third party, and imported onto this page to help users provide their email addresses. You may be able to find more information about this and similar content at piano.io
Advertisement - Continue Reading Below
More From Money & Career
The Moms Who Had to Postpone a Travel Gap Year
Couples + Money
Women Marry Their Glass Ceilings
Advertisement - Continue Reading Below
These Women Are Making Space Vacations a Reality
The Women Making WFH Happen
Building a Business That's Also a Safe Space
The Unemployed Couple Squatting in Their Apartment
Couples + Money
Today Marks Black Women’s Equal Pay Day
Can Vanessa Pappas Save TikTok?
The Blogger Couple Who Made $20K Mid-Pandemic
Couples + Money
A New, Free Resource Celebrating Women in STEM