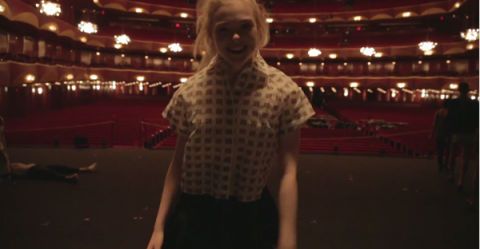 It makes sense, really: Give some photographers an #EmptyMet, and they go ham on a hordes-less Temple of Dendur. Give Spike Jonze, Elle Fanning, and the Opening Ceremony team a different kind of #EmptyMet, and they make an achingly awkward-adorable, off-the-cuff music video.

To congratulate Karen O on her new solo album Crush Songs, the writer-director and star of OC's Spring 2015 play-cum-fashion-show collaborated on a short film set to "Ooo." "It just seemed like if you have the Opera House, that song, and Elle Fanning together, you shouldn't let the opportunity go by," Jonze wrote for Vice.

Watch the final product below, and, if you're like us, start location scouting for your own #EmptyVenue.