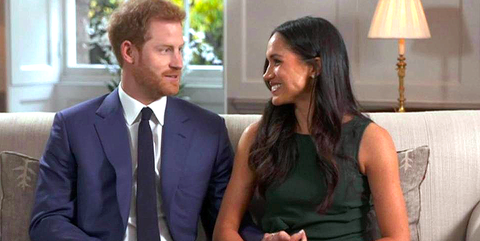 To put it simply, Prince Harry and Meghan Markle have been *very* secretive about their relationship over the last six months—leaving us wondering about their every move (kidding but not). Following the news of their engagement, the pair held their first interview together Monday afternoon and let's just say we learned...a lot. Ahead, everything you need to know about the newly engaged couple.

They met on a blind date.

A mutual friend set them up and they met for a drink. Markle admits, “I had one question: Is he nice?”

Prince Harry had never heard of Markle before meeting her.

“I had never even heard about her until this friend…I never watched Suits, I never heard of Meghan before. I was beautifully surprised when I walked into that room and saw her.”

Markle knew nothing about him either 😱.

“Because I’m from the States you don’t grow up with the same understanding of the royal family. I didn’t know much about him...everything I learned about him I learned through him.”

Race hasn't been an easy topic on Markle.

“It’s a shame that’s the climate in this world is to focus that much on [race] and be discriminatory in that sense. I’m really proud of who I am and where I come from. We have never put any focus on that as a couple.”

“Once you have access or a voice that comes with a lot of responsibility...I’m excited to really get to know more about the communities in the UK, smaller organizations, and being able to go around to the commonwealth.”

Prince Harry also chimed in, “There’s a lot to do.”

There's *definitely* going to be children in the future.

When the interviewer mentioned the word "children," Prince Harry jokingly responded, "Not currently, no." He then proceeded to say, "One step at a time. Hopefully we’ll start a family in the near future.”

Their relationship in the public eye has been anything but easy.

"I tried to warn her as much as possible," says Harry. "I think both of us were totally surprised by the reaction of the first five, six months of what happened. We were totally unprepared [for the scrutiny]."

Markle has met the Queen multiple times, and *loved* every minute of it.

“It’s incredible. To be able to meet her through his lens, not just with his honor and respect for her as a monarch, but also his love for her as a grandmother. I have a deep understanding and incredible respect for being able to spend that time with her.”

Though they have talked a few times on the phone.

The couple got engaged in Nottingham Cottage at Kensington Palace, and it was *so* romantic.

"It happened a few weeks ago at Nottingham Cottage...just a cozy night roasting chicken...It was an amazing surprise and so sweet…very romantic," says Markle.

The Prince adds, "She didn't even let me finish, she said 'can I say yes, can I say yes?' and then were was hugs and I had the ring in my finger and I was like 'can I give you the ring?' She goes 'oh yes, the ring.' So no it was a really nice moment, it was just the two of us and I think managed to catch her by surprise as well."

Related Story
Prince Harry on How He Proposed to Meghan Markle

Speaking of the ring, it pays tribute to Princess Diana.

"The ring is yellow gold because it’s [Meghan’s] favorite. The main stone is from Botswana and the little diamonds are from my mother’s collection to make sure she’s on this crazy journey with us together.”

They are head-over-heels in love (in case it wasn't obvious).

"The fact that I fell in love with Meghan so incredibly quickly was that the stars were aligned…this beautiful woman tripped and fell into my life," says Prince Harry. "I know she’ll be unbelievably good at the job part of it, which is a relief to me. We’re a fantastic team."