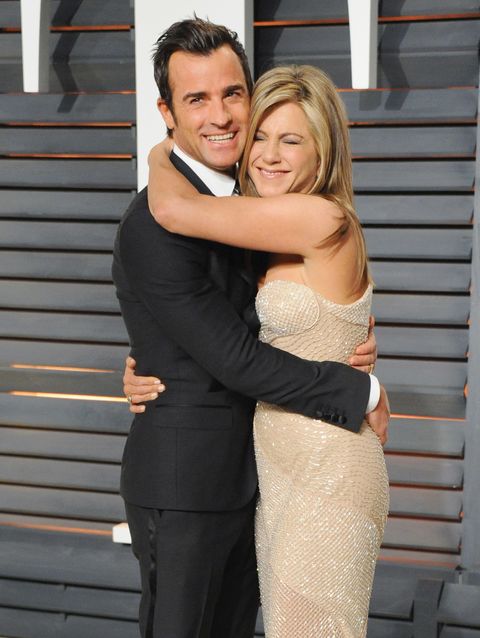 Wedding planning is stressful enough as it is, especially when you're a celebrity whose every move is immediately in the public eye. Make it a *secret* celebrity wedding and it's pretty much guaranteed that you cortisol levels will skyrocket.

At least, that's how Justin Theroux looks back on his pre-wedding prep with Jennifer Aniston. Theroux and Aniston tied the knot this past August in a very private, hush-hush way. Their nuptials were not announced or publicized and they kept as many details as possible on the DL—which is a big challenge when everyone is speculating and snooping.

"I wouldn't say it was fun to plan," Theroux admitted to the Daily News. "Part of the fun of planning a wedding is telling people and we had to keep it under wraps."

Now that the Hollywood newlyweds are officially hitched, the pressure has subsided and they're just enjoying the honeymoon phase.

"I noticed it almost immediately," Theroux explained. "It was like your blood pressure goes down two PSI. It's not like life is completely different. It's a beautiful thing."

Let's hope they get to enjoy the excitement of married life a bit more than they did with their wedding planning.

Sarah Lindig Senior Digital Editor, Special Projects Sarah Lindig is the senior digital editor, overseeing special projects for Harper's Bazaar.
This content is created and maintained by a third party, and imported onto this page to help users provide their email addresses. You may be able to find more information about this and similar content at piano.io
Advertisement - Continue Reading Below
More From Celebrity
Katie Holmes' Mango Puffer Coat is a Winter Staple
Kate Rewore Her Favorite Festive Tartan Dress
Advertisement - Continue Reading Below
Kate and Charlotte Hunt for Spiders Together
Princess Diana's Nieces Opened Up About Their Aunt
Elizabeth Hurley, 55, Shows Off Toned Abs On Insta
Keira Knightley Won't Do Nude Scenes Filmed by Men
Kourtney Kardashian Is Dating Travis Barker
Priyanka Chopra Jonas Talks Her New Memoir
Priyanka and Nick on Their Quarantine Quality Time
Priyanka Pulls Back the Curtain