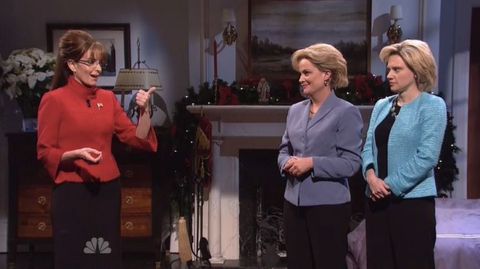 Fey and Poehler reprised their classic roles in last night's episode of Saturday Night Live for a skit titled "A Hillary Christmas." 2008 Hillary Clinton (Poehler) appears to 2015 Hillary Clinton (McKinnon) in a Christmas Eve dream to catch up on the state of affairs since she originally ran for president seven years ago.

Poehler's Clinton compliments McKinnon's Clinton's haircut, warns against her getting too comfortable: "That's actually why I'm here, Hillary, to warn you. On Christmas Eve 2007 I was cocky too, and then someone named Barack Obama stumbled out of a soup kitchen with a basketball and a cigarette and stole my life." Also, be careful with those emails, HC '08.

McKinnon's Clinton assures her things are not as they once were, dropping the bomb about who she's up against that causes Poehler's Clinton to faint from shock. (We would've done the same if you'd told 2008 us that Donald Trump would be running for president in the next election.)

Enter: Fey as her Alaskan-accented alter ego, Sarah Palin, offering up her own brand of cloudy, roundabout advice. "Well jeez, I should be the one offering you advice because in 2008 I got a heck of a lot closer to the White House than this gal did," she jabs at Poehler's Clinton. (Them's fightin' words.) "Here's my advice: You gotta do what you believe in your spirit, but also America, but not teachers and their fat liberal books, but also and even why worry about—" And that's about where we lost her…

Watch the full skit in all its nostalgic glory and political parody below:

This content is imported from YouTube. You may be able to find the same content in another format, or you may be able to find more information, at their web site.
Sarah Lindig Senior Digital Editor, Special Projects Sarah Lindig is the senior digital editor, overseeing special projects for Harper's Bazaar.
This content is created and maintained by a third party, and imported onto this page to help users provide their email addresses. You may be able to find more information about this and similar content at piano.io
Advertisement - Continue Reading Below
More From Celebrity
Lilibet May Be Christened in California After All
The Sweet Family Photos in Prince William's Office
Advertisement - Continue Reading Below
Royal Family Members Can’t Eat Pasta or Potatoes
Prince George Is an Environmentalist, Too
Salma Hayek Looked Super Hot in Leopard Print
Britney Spears Just Trolled Justin Timberlake
Billie Eilish Says Kate and Will Were "So Normal"
Prince William Slammed Billionaires' "Space Race"
Lady Gaga Draped Herself in $100 Bills
Kate Middleton Wore Green to Celebrate Nature