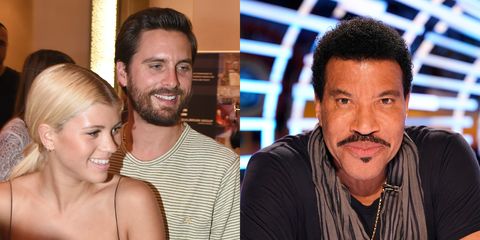 In case you wondered, Lionel Richie has some thoughts on his 19-year-old daughter's relationship with 34-year-old Scott Disick. And when it comes to Sofia Richie's love interests, he's doing his best to stay out of it.

In a new interview with Australia's Daily Telegraph (via E! News), Richie said:

"When you're 19 you know everything. Is it going to be for life? I don't know. But for right now it's just a phase and I'm going to stand real still in the corner, get me a good drink and not make too much noise."

Calling the relationship "just a phase" is pretty brutal, but probably relatable if one of your parents has ever had an opinion on your significant other.

And Richie didn't stop there. After revealing that he's just sipping his drink while his daughter dates the father of Kourtney Kardashian's children, Richie then went on to discuss his impression of Disick having met him in person.

"From what I met of him he's a very nice guy. When you hang around the reality world, who knows what you are really doing? This is a well-oiled machine, the Kardashian machine. I don't really know what to think. I told Sofia I will have no opinion. I'll continue to be my cheerful self and move on."

So the American Idol judge is trying to stay out of his daughter's relationship with Disick, but it seems pretty clear that he's hoping it's not a forever-type-situation. Plus, the jury is out on whether he's a fan of "the Kardashian machine" or not. Dads, eh?