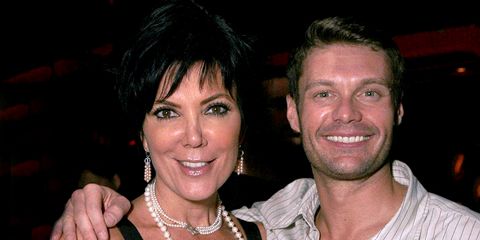 Last month, Ryan Seacrest was accused of sexual abuse and harassment by former E! stylist, Suzie Hardy (her allegations first came to light in November, but she was anonymous at the time and the full details of her story had not yet been made public).

Hardy, who started working as Seacrest’s personal stylist for E! News in 2007 and left in 2013, alleged that she was subjected to “years of unwanted sexual aggression,” including Seacrest “grinding his erect penis against her while clad only in his underwear, groping her vagina, and at one point slapping her buttock so hard that it left a large welt still visible several hours later."

Seacrest has repeatedly denied the allegations and E! has conducted an internal investigation into the claims. An E! spokesperson told Variety the investigation was "extremely comprehensive and thorough. Over the course of a two month process, our outside counsel interviewed more than two dozen people regarding the allegations, including multiple separate meetings with the claimant. The investigator is an attorney with nearly 20 years experience and is highly regarded professionally. Any claims that question the legitimacy of this investigation are completely baseless."

Earlier this week, Seacrest's Live with Kelly and Ryan cohost, Kelly Ripa, publicly supported him on air. "I cannot wait to see you [at the Oscars]," she said. "I just want you to know that you are a privilege to work with and I adore you. I'm speaking on behalf of all of us here. I know what an easy, professional, great person you are, and I feel very, very lucky to work with you each and every day. And we all do, we all do."

Now, Kris Jenner has also spoken out about Seacrest. The reality star (whose flagship show, Keeping Up With the Kardashians, was developed and is still produced by Seacrest) took to show her support.

"Oscar Sunday wouldn’t be the same without you @ryanseacrest @giulianarancic!! Can’t WAIT to watch you on the Red Carpet tonight!! I look forward to this night every year! I’m so proud of you!!" she wrote in a caption of a picture with her and Seacrest together.

Kayleigh Roberts Contributor Kayleigh Roberts is the weekend editor at Marie Claire, covering celebrity and entertainment news, from actual royals like Kate Middleton and Meghan Markle to Hollywood royalty, like Katie Holmes and Chrissy Teigen.
This content is created and maintained by a third party, and imported onto this page to help users provide their email addresses. You may be able to find more information about this and similar content at piano.io
Advertisement - Continue Reading Below
More From Celebrity
Jennifer Lopez and Ben Affleck: Everything We Know
Harry & Oprah's Mental Health Doc Has a Title
Advertisement - Continue Reading Below
Serena Williams Might Miss the Tokyo Olympics
Jennifer and Ben Have "Unreal" Chemistry Together
The Sussexes Marked Archie's Bday in a Lovely Way
Queen's Cousin Accused of Selling Access to Putin
Meghan Wore a Meaningful Necklace for Vax Live
How Celebrities Are Celebrating Mother's Day 2021
Gabrielle and Kaavia's Mother's Day Pic is So Cute
Ben Affleck's Moving Tribute to Jennifer Garner