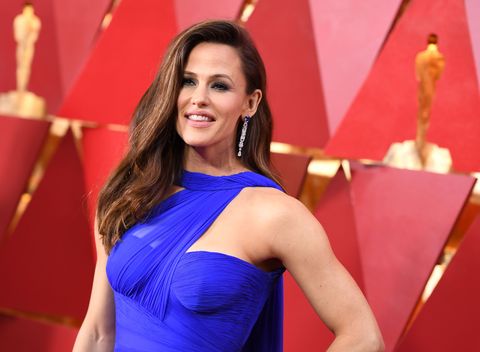 Jennifer Garner knows that you've seen the meme of her realizing something at the Oscars. And while she clearly doesn't love the fact that her face went viral, she opened up to Ellen DeGeneres about what exactly was going on with her face at the Oscars.

Appearing on The Ellen DeGeneres Show, Garner revealed that she doesn't usually look at herself on the internet, but that the viral meme was everywhere. She revealed, "I started getting texts as you can imagine, people saying, 'What were you thinking? What was happening?' And I try really hard not to see myself online but she’s a little unavoidable."

But as for what she was actually thinking about, Garner doesn't even know. She told Degeneres:

"I can’t even look at it. I can’t. It’s too embarrassing. I have no control over this. What am I doing? I wanna just punch her in the face. I wish I had a better story about it!"

So there you have it. Jennifer Garner wants to punch herself in the face. Which seems pretty harsh considering how much people adore that meme.

But sadly, Garner literally has no clue what she was thinking about. Which leaves us with the possibilities she revealed in her Snapchat response to the now classic moment:

1. "Congrats to Shape of Water...maybe I should date a fish."

2. "Hey Jimmy Kimmel what's in your wallet? Wait, where is my wallet?"

3. "Can't wait to work with Lena Dunham! Wait, did I sign a nudity waiver?"

Amy Mackelden Weekend Editor Amy Mackelden is the Weekend Editor at HarpersBAZAAR.com, where she writes about entertainment, celebrity news, beauty, and fashion.
Advertisement - Continue Reading Below
More From Celebrity
Rihanna Went Big With Her 32nd Birthday Party
47 Really and Truly Adorable Celebrity PDA Moments
Advertisement - Continue Reading Below
Dakota Johnson Rocks Gucci Suit in Milan
The Cast & Director of 'Cruel Intentions' Reunite
Prince Harry Spotted on a Grocery Run in Canada
Kanye West Leaves Kim Kardashian in an Elevator
Channing Tatum Is "Happy" for Jenna Dewan
Inside Chrissy Teigen and John Legend’s Home
A Look at Royal Family Portraits Through the Years
Are The Weeknd's 'After Hours' Lyrics About Bella?