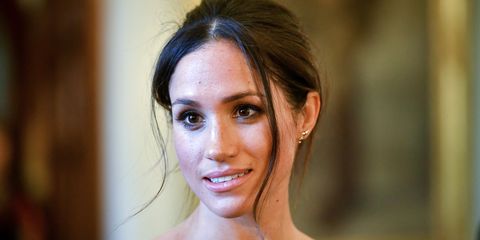 Becoming a royal is starting to sound like a very complicated process. According to a new report, Meghan Markle has had to undergo intensive kidnap training before she joins the royal family, should she ever be abducted or an attempt is made on her life.

According to the Daily Express, the former Suits actress has already spent two days undertaking security training, in preparation for her new life married to Prince Harry. The training apparently comprised of "a 'kidnap and rescue' situation, in which forces from the Royal Army's SAS regiment used live ammunition" so that Markle would know what "real gunfire" sounded like, should she ever be placed in a threatening situation, according to a report via ELLE UK.

A trained operative told the Daily Express that Markle would have been instructed to "create a relationship with potential kidnappers, which is apparently better than trying to escape." Basically, there are a lot of harsh and potentially life-threatening realities that accompany marrying a prince.

The operative also revealed (via Harper's BAZAAR UK), "Even though Meghan will have known the enemy was not real, I guarantee that she will have been petrified," which seems likely, as we're petrified just reading about it.

Newsweek is reporting that Markle was also given "outdoor survival pointers in case of her escape," and that she "was abducted by British special forces and held by mock kidnappers."

Now that her training is complete, Markle is presumably much more prepared to marry into the royal family. Her wedding to Prince Harry will take place on May 19, 2018, at St George’s Chapel at Windsor Castle.

Amy Mackelden Amy Mackelden is a freelance writer, editor, and disability activist.
This content is created and maintained by a third party, and imported onto this page to help users provide their email addresses. You may be able to find more information about this and similar content at piano.io
Advertisement - Continue Reading Below
More From The Ultimate Guide to the Royal Family
The Queen's Corgis Are Helping Her With Her Grief
Charles is Looking Forward to Seeing Harry Again
Advertisement - Continue Reading Below
Will & Harry to Walk Together at Philip's Funeral
Prince Charles Addresses Prince Philip's Death
Prince William Pulls Out of 2021 BAFTA Appearances
Prince Philip Said He Had No Desire to Live to 100
The Queen Was by Prince Philip's Side When He Died
Prince Harry Is "Really Upset" Over Philip's Death
Will Harry & Meg Attend Prince Philip's Funeral?
The Queen Is Hopeful Prince Harry Will Return Home