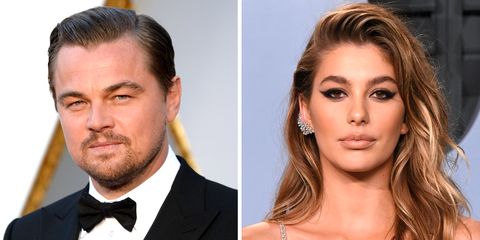 Leonardo DiCaprio, man of many women, reportedly has a new girlfriend. The actor has been spotted with—surprise!—a model on his arm, literally. Leo, 44, and Argentinian model Camila Morrone were photographed leaving breakfast in Hollywood elbow-in-elbow yesterday.

Reports that the two were "hooking up" first surfaced in December, and the relationship was said to be casual—but that is evidently no longer the case: Leo was photographed carrying a doggy bag. Yes. Things are serious.

Initial reports also stated that the two were just family friends. According to US Weekly: "a source close to Morrone counters that she and the Wolf of Wall Street actor are just family friends who have known each other more than 10 years as Morrone’s mom, Lucila Sola, is dating DiCaprio’s friend Al Pacino."

Your Boo Boo's last relationship ended in May of 2017: Leo dated Sports Illustrated model (and Camila Morrone lookalike) Nina Agdal, now 26, for more than a year. "They remain in touch. They both felt the relationship ran its course. It’s amicable. They still do talk and remain friends," a source told US Weekly at the time.

The actor has, of course, dated many other famous women: Gisele Bündchen, Bar Refaeli, Blake Lively, and Kelly Rohrbach are just a few of the blondes Leo has had relationships with in the past.

Let's see if Leo and Morrone make things official with a Citi Bike.

Related Story
Rumored Celebrity Couples We *Hope* Are Real
Sally Holmes Editor in Chief Sally is the Editor in Chief of Marie Claire where she oversees coverage of all the things the Marie Claire reader wants to know about, including politics, beauty, fashion, and celebs.
This content is created and maintained by a third party, and imported onto this page to help users provide their email addresses. You may be able to find more information about this and similar content at piano.io
Advertisement - Continue Reading Below
More From Celebrity
Chrissy Said She's In a "Grief Depression Hole"
Taylor Said Joe Co-Wrote Two Songs on 'Folklore'
Advertisement - Continue Reading Below
J.Lo Bares Her Body On Instagram
NYE Outfits to Get You Into the Countdown Spirit
Beyoncé Now Has a Staggering 79 Grammy Nominations
Chrissy and John Spoke About Grieving Baby Jack
Meghan Markle Revealed She Had a Miscarriage
Jewel's Jewelry Collection Is Eclectic and Fun
How to Copy Katie Holmes' Effortless Style
Chrissy's Red Lip Look Is Perfect for the Holidays