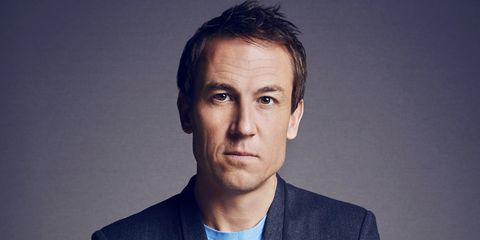 TV addicts will recognize the prolific Tobias Menzies from a couple of extremely high profile roles. He's best known for appearing on Outlander and Game of Thrones, but the news that he will take on the part of Prince Philip in Season 3 of The Crown is huge.

Here's everything you need to know about Menzies:

1. He played two roles on Outlander.

Outlander fans don't need me to tell them that Menzies played both both Frank Randall and Jonathan "Black Jack" Randall.

Frank, of course, is Claire's long suffering husband, while Black Jack is his sadistic ancestor. On leaving Outlander behind, Menzies told The Hollywood Reporter, "It's been a great journey. I worked hard on both of these characters. It was a challenge to make them different, but in a subtle way so it wasn't too obvious. "

His characters exited the show in Season 3, freeing Menzies up for his new part on The Crown.

2. His character on Game of Thrones didn't get killed off.

Menzies starred in Game of Thrones as Edmure Tully, appearing in eight episodes, then leaving the show in Season 6. Amazingly, Menzies' character didn't die, at least not onscreen.

As for whether he'll return to Game of Thrones, Menzies told Digital Spy, "The honest answer is, I have no idea. He's obviously somewhere in a prison, he's still around alive somewhere. They're pretty stingy with their information and I've not heard anything from them."

3. Menzies is British and trained at a prestigious acting school.

The actor was born in London. His mother was a teacher, and his father worked at the BBC as a producer. He studied acting at the Royal Academy of Dramatic Art (RADA), graduating in 1998.

Menzies previously appeared onstage playing Keira Knightley's fiancé in The Children's Hour in the West End, alongside Elizabeth Moss and Ellen Burstyn. He starred opposite Maggie Gyllenhaal in the BBC miniseries, The Honorable Woman, too.

5. Menzies is a passionate advocate for several charities.

In 2016, the actor volunteered at a Calais refugee camp, and he also supports WaterAid, which seeks to "transform the lives of the poorest and most marginalized people by improving access to safe water, sanitation and hygiene."

6. His Outlander co-star, Caitriona Balfe, was the first to congratulate him.

Yes!!!!!!!!! @TobiasMenzies Congratulations darling. So excited for you and so excited to see this!!! https://t.co/skelzIQLjg

Retweeting the news, Balfe wrote, "Yes!!!!!!!!! @TobiasMenzies Congratulations darling. So excited for you and so excited to see this!!!"

Related Story
Everything We Know About 'The Crown' Season 3
Amy Mackelden Amy Mackelden is a freelance writer, editor, and disability activist.
This content is created and maintained by a third party, and imported onto this page to help users provide their email addresses. You may be able to find more information about this and similar content at piano.io
Advertisement - Continue Reading Below
More From The Crown
Princess Diana's Butler Talks 'The Crown'
Yes, Prince Charles Really Survived an Avalanche
Advertisement - Continue Reading Below
'The Crown' Copied Princess Di's Style Perfectly
Who Are Margaret Thatcher's Kids, Carol and Mark?
Who Is Sarah Spencer in 'The Crown'?
Princess Diana's Wedding Dress Is Now on ﻿Display
'The Crown' Season 4 Is Coming So Soon
Will Harry & Meghan Feature on 'The Crown'?
Imelda Staunton Will Play the Queen In 'The Crown'
Fact-Checking the Third Season of 'The Crown'