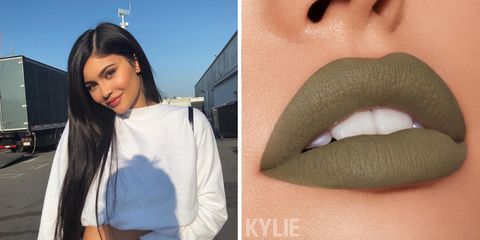 Yesterday, beauty mogul Kylie Jenner announced she was adding four new colors to her lip kit collection, and the internet had a lot to say about them—specifically about the army-green shade, named Ironic.

After Kylie Cosmetics shared a video of the new color on Instagram, followers immediately took to the comments section, comparing the moss-green shade to "pea soup" and "Stormi's diaper." Or, as one user put it, "I’m sorry, but I’m not paying $29 for diarrhea lips."

First of all, let's leave the baby out of it. Sure, she may have created an entire new makeup collection inspired by her daughter, but I think it's safe to say that Kylie was simply creating a unique shade that she felt would look good on some—albeit a small, small selection—of people.

No offense but are people really looking at that Kylie puke green lip kit and wanting it? Even I can’t do it pic.twitter.com/d79xtOgN6d

Love it or hate it, the shade is coming for you on April 10 at Kylie Cosmetics. Get ready, folks.

Alex Warner
Advertisement - Continue Reading Below
More From Trending Beauty
Glitter Pumpkin Butts Are a Thing for Halloween
I Tested Meghan Markle's Top Beauty Products
Advertisement - Continue Reading Below
Behold: The Self-Tanner Fail to End All Fails
This Is Pinterest's #1 Halloween Makeup Idea
These 3 Products Cured This Woman's Acne
Princess Eugenie Just Dyed Her Hair Bright Red
13,000 People Swear By This Eye Cream
Post Malone Cut His Hair and Looks Unrecognizable
Shay Mitchell Will Only Use This One Concealer
People Are Freaking Out About Emma Stone's Hair