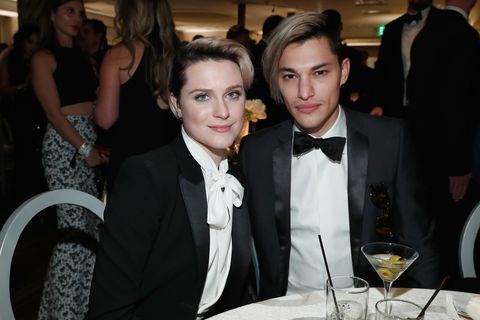 Evan Rachel Wood and her fiancé, Zach Villa, split in September 2017 after confirming their engagement in January of the same year. Here's what you need to know about the Westworld star's ex.

The couple met when they performed together in a John Hughes-themed cabaret in Los Angeles back in 2015.

They were in a band together.

After working together in the John Hughes-themed show, Wood and Villa teamed up for another project, starting an electro-pop duo named Rebel and a Basketcase.

According to Rebel and a Basketcase's website, Villa is a self-taught "multi-instrumentalist and singer-songwriter." The impressive list of instruments he can play includes the guitar, bass, keyboards, and drums.

He has other experience in music.

Villa's background in the music industry extends well beyond his collaborations with Wood. He has sung with the Los Angeles Philharmonic and served as the frontman for the L.A.-based band Cylvia. He also starred in a musical web series called Dan Is Dead alongside Nickelodeon alum Drake Bell.

He went to Julliard.

Villa trained as an actor at Juilliard, which is also where he explored his interest in songwriting. His acting credits include the FOX animated series Bordertown, and the movies As You Like It and Honeyglue.

The couple subtly announced their engagement to the world at the 2017 Screen Actors Guild awards when they turned up wearing matching silver engagement rings (and complimentary suits).

Related Story
What You Need to Know About 'Westworld' Season 2
Kayleigh Roberts Contributor Kayleigh Roberts is the weekend editor at Marie Claire, covering celebrity and entertainment news, from actual royals like Kate Middleton and Meghan Markle to Hollywood royalty, like Katie Holmes and Chrissy Teigen.
This content is created and maintained by a third party, and imported onto this page to help users provide their email addresses. You may be able to find more information about this and similar content at piano.io
Advertisement - Continue Reading Below
More From Celebrity
Twitter Blasts Media's Targeting of Duchess Meghan
Palace Is Looking Into Meghan Bullying Allegations
Advertisement - Continue Reading Below
Meghan & Eugenie Are Still Close After Royal Exit
Harry's Oprah Interview Suit Is a Nod to Archie
Ryan Seacrest's Relationship History, Explained
Angie Sells Painting from Brad for $11.5 Million
Meghan and Harry Blame the Palace for New Article
Serena Williams & Daughter Pose for First Campaign
Britney Spears Shares Rare Photo of Sons on IG
Kim Kardashian Fell Asleep Mid-Glam