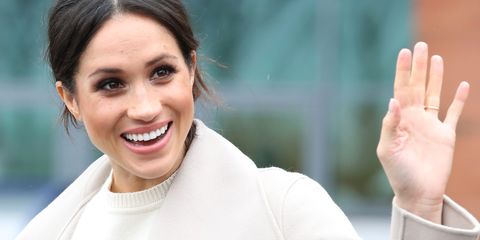 Meghan Markle's wedding to Prince Harry is just six weeks away, which has us driving ourselves batty over when she'll finally say yes to the dress.

Sadly, Randy and his team at Kleinfelds will probably have nothing to do with Meghan's dress-picking process (although there is definitely an alternate universe where she's marrying a fellow USA star and 100 percent appearing as a celebrity guest on Say Yes). Or, not that sadly considering the options available to Meghan as a future duchess.

With the exception of the guest list, Meghan's dress has been the most highly-anticipated reveal of the royal wedding—and all signs point to Erdem, the British fashion house run by the Canadian-born designer Erdem Moralıoğlu.

Why do we believe that Erdem has snagged the coveted design job, you ask. Well, for starters, they recently announced that they are bringing their public relations operations in-house, hiring new PR manager Kathryn Lo, according to Diary Directory. The decision to staff-up on the PR front in favor of outsourcing to agencies suggests something big (and very hush hush) might be on the horizon.

Staffing changes aside, experts have been pointing to Erdem as a favorite option for Meghan's wedding look for a while now. The designer has established ties with the royal family (Kate has worn Erdem on multiple occasions, notably during her royal visit to Sweden and Norway in January) and the company's connection to both the UK and Canada honor Meghan's new home and Toronto, where she lived while filming Suits.

Erdem certainly seems like a perfect fit, but we won't really know who is designing Meghan's wedding dress until she walks down the aisle at St. George's Chapel on May 19.

Related Story
How Meghan Markle Honored Princess Diana
Kayleigh Roberts Contributor Kayleigh Roberts is the weekend editor at Marie Claire, covering celebrity and entertainment news, from actual royals like Kate Middleton and Meghan Markle to Hollywood royalty, like Katie Holmes and Chrissy Teigen.
This content is created and maintained by a third party, and imported onto this page to help users provide their email addresses. You may be able to find more information about this and similar content at piano.io
Advertisement - Continue Reading Below
More From Celebrity
Sam Asghari Opens Up About Britney Documentaries
Prince Harry’s Memoir Is Concerning Royal Insiders
Advertisement - Continue Reading Below
Meghan Markle Wore Some Familiar Earrings in NYC
Harry and Meghan Could Visit England for Christmas
Meghan Markle Looked Gorgeous at Global Citizen
Harry and Meghan Are Taping Their NYC Trip
Keep an Eye on Lady Louise Windsor
Princess Beatrice's Daughter May Get a Royal Title
James Middleton’s Wife Thought He Was a Waiter
Meghan Markle Got a New Nickname