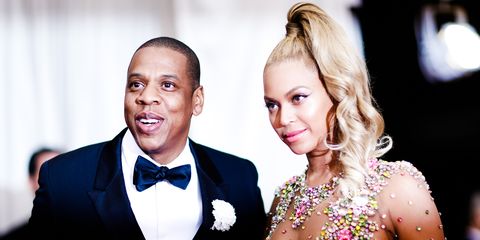 Jay-Z appeared on the latest episode of David Letterman's Netflix interview series, My Next Guest Needs No Introduction, and got very real about a very personal topic: infidelity.

Letterman, who infamously admitted to cheating on his wife in 2009 after a blackmail attempt, addressed his own infidelity before giving the rapper a chance to talk about his own affair.

"A few years ago, I got myself into some trouble, and the situation was my responsibility and my fault. I did something that I had no business doing and I regret it and since then I have tried to acknowledge that mistake and be a better person," Letterman said, according to The Hollywood Reporter. "At the time the pain that I caused myself was the fear that I had blown up my family…I never talked to a person who had been in that situation. And I'm wondering if this rings a bell with you."

Jay-Z talked about being unfaithful to his wife, Beyoncé, calling her "understanding" and discussing how they've worked through their issues.

"Much like you I have a beautiful wife who was understanding and who knew that I'm not the worst of what I've done and who did the hard work of going to therapy and really, we love each other. We really put in the work," Jay-Z said. "For years, this music that I'm making now is a result of things that happened already. Like you, I like to believe that we're in a better place today but still working and communicating and growing. I'm proud of the father and the husband that I am today because of all the work that was done."

Kayleigh Roberts Contributor Kayleigh Roberts is the weekend editor at Marie Claire, covering celebrity and entertainment news, from actual royals like Kate Middleton and Meghan Markle to Hollywood royalty, like Katie Holmes and Chrissy Teigen.
Advertisement - Continue Reading Below
More From Celebrity
Inside Chrissy Teigen and John Legend’s Home
A Look at Royal Family Portraits Through the Years
Advertisement - Continue Reading Below
Are The Weeknd's 'After Hours' Lyrics About Bella?
Kendall and Harry Had a Moment At the Brit Awards
Dwyane Wade on Getting Zaya's Pronouns Right
Harry Styles' Diana-Inspired Brit Awards Outfits
Jenna Dewan and Steve Kazee Are Engaged
Kim Seemingly Tried to Kiss Kanye on a Kiss Cam
Ashley Graham Continues to Spread Body Positivity
'Bachelor' Victoria F. & Peter's Ex Had a Fight