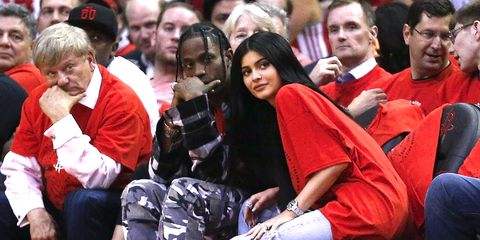 Kylie Jenner and Travis Scott have had quite a year. The couple were first linked after being spotted together at Coachella last year and, in February, they welcomed their first child together, an adorable little girl named Stormi Webster. That's a lot for a year of dating.

So, how has becoming parents changed their relationship? Only for the better, according to E! News' unnamed sources.

"Kylie Jenner and Travis Scott are currently in the best place they have ever been in their relationship," one source said. "Things really came full circle once Stormi was born and they now have an unbreakable bond. Travis has been fully accepted into the family and everyone is in love with their little family they created."

thank you @wttyler for putting this together. here’s a little glimpse of the last 9 months. the link is in my bio ♥️

Kylie and Travis have been spotted together just a few times since welcoming Stormi, but the Kardashian-Jenner source says Travis is a very hands-on dad.

"Travis has been helping a lot with Stormi and is obsessed with her," the source explained. "He helps a lot at night and makes sure Kylie is getting enough sleep, and likes to spoil Kylie with gifts so she knows she is still important."

In addition to all the bonding time, Travis has been showing Kylie that he cares with lavish push presents and she's been spotted wearing a ring with his initials. Still, the couple are reportedly not living together (yet, anyway) and seem committed to coparenting and seeing where things go romantically.

Sounds like Kylie, Travis, and Stormi are a very happy family, which is honestly the most important thing.