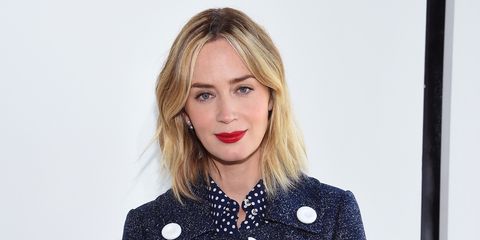 The Devil Wears Prada is one of those movies that people always talk about wanting a sequel to. The 2006 hit, starring Anne Hathaway and Meryl Streep, was incredible, after all. But, at least one person very close to the project doesn't think a sequel is such a good idea.

Emily Blunt, who starred as an assistant named Emily in the movie, recently told People that she's not entirely sold on a Devil Wears Prada sequel as a good idea.

"I almost hope it doesn’t [happen] because I think sometimes when you sequel everything kind of dilutes how special the original is," she explained.

Fair. So. Fair. There are a lot of disappointing sequels streaming on Netflix to remind us that this is not always a good idea. That said, Blunt did admit that, if everyone else in the cast were down, she'd throw caution to the wind and go ahead and do the sequel anyway.

"If everyone did it I would be up for it," she said.

The Devil Wears Prada introduced her to some of her best friends in the industry—and one future in-law.

"We all just wept with laughter," she said of filming the movie. "I loved working with sweet Annie Hathaway and it was my first experience working Meryl [Streep] and Stanley Tucci who is now my brother-in-law."

Looks like the ball is in your court, Meryl.

Kayleigh Roberts Contributor Kayleigh Roberts is the weekend editor at Marie Claire, covering celebrity and entertainment news, from actual royals like Kate Middleton and Meghan Markle to Hollywood royalty, like Katie Holmes and Chrissy Teigen.
This content is created and maintained by a third party, and imported onto this page to help users provide their email addresses. You may be able to find more information about this and similar content at piano.io
Advertisement - Continue Reading Below
More From Celebrity
Surprise—Halsey Is Pregnant With Her First Child
Um, Why Is the Weeknd's Face Bloody and Bandaged?
Advertisement - Continue Reading Below
Your First Look at Kristen Stewart as Diana
47 'Friends' Facts Every Superfan Should Know
Eugenie Shared a Rare Candid Snap With Her Husband
Why Serena Didn't Want Olympia to Play Tennis
J.Lo Talked Botox Claims: "Don't Call Me a Liar"
Kate Has Her Own Direct Line to the Queen
Megan Thee Stallion’s Hottie Bootcamp Is Intense
Katie Holmes' Mango Puffer Coat is a Winter Staple