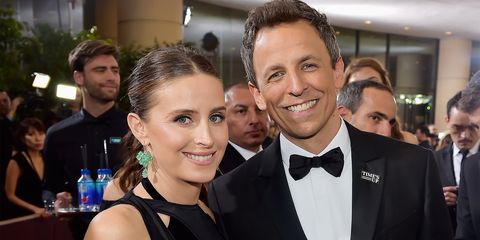 Seth Meyers and Alexi Ashe welcomed their second child, Axel Strahl, on Sunday, but in an unexpected place—the lobby of their apartment. The late-night host revealed on Monday that they didn't quite make it to the hospital.

During his Late Show monologue, Meyers recalled how his first son, Ashe Olsen, now 2, was almost born in an Uber. "Move over that story, because that's so normal compared to what happened yesterday," Meyers said. 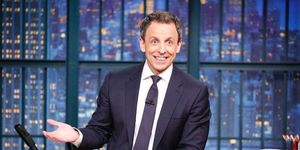 It was a typical Sunday—Meyers and and his wife were out at brunch when she started "feeling something."

"We get into the lobby of our building, I've called an Uber, and the Uber is outside," he explained. "We basically get to the steps of our building—we're in the lobby and we're walking out on the steps and my wife says, 'I can't get in the car. I'm going to have the baby right now. The baby is coming!'"

Within seconds, their second son was born. Meyers goes on to say that his wife "looked like someone who was hiding a baby in a pair of sweatpants."

Watch him explain the entire dramatic birth story below.

This content is imported from YouTube. You may be able to find the same content in another format, or you may be able to find more information, at their web site.
Alex Warner
This content is created and maintained by a third party, and imported onto this page to help users provide their email addresses. You may be able to find more information about this and similar content at piano.io
Advertisement - Continue Reading Below
More From Celebrity
Emma Watson Stunned at the Earthshot Prize
Kate "Didn't Have Much Energy to Bond" With Meghan
Advertisement - Continue Reading Below
Blake Lively Trolled Ryan Reynolds Again
Kourtney Kardashian and Travis Barker Are Engaged!
See Kate Middleton's Subtle Environmental Look
Prince George "Adored" Seeing Dinosaur Fossils
Kate Middleton Borrows The Queen's Fashion Trick
Princes Charle and William "Competing" Over Causes
Lilibet May Be Christened in California After All
The Sweet Family Photos in Prince William's Office