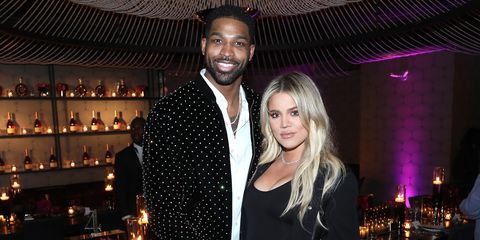 This week, reports broke that Tristan Thompson cheated on Khloé Kardashian with multiple women during her pregnancy. While Khloé has yet to comment publicly on the growing scandal, sources close to the famous family have reported that she's "distraught" by the news and some are even claiming that the stress of the situation has brought on early contractions.

Khloé is said to be "putting her feelings on hold."

Now, TMZ is reporting that, in spite of everything that's (rumored to have) happened, Khloé plans to allow Tristan into the delivery room for the birth of their daughter.

"Sources familiar with the situation tell us Khloé's devastated by the recent revelations, but understands the importance of the birth in the lives of everyone involved," TMZ wrote.

Khloé is said to be "putting her feelings on hold" for what she believes is best for her child, whom she wants to allow to bond with her father in the delivery room. Kris Jenner is reportedly already in Cleveland to support Khloé, with other members of the KarJen clan scheduled to arrive by Friday.