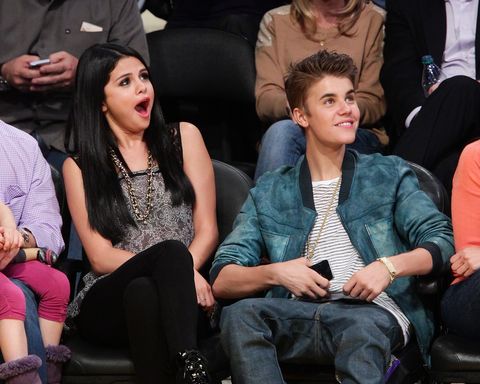 Justin Bieber and Selena Gomez don't appear to be exclusively dating, but they aren't totally avoiding each other, either—so at least there's that. The infamously on-again, off-again couple were both spotted leaving Hillsong Church on Wednesday night in Los Angeles, according to ET Online. They apparently attended—and left—the service separately however.

"He loves her so much, but they both know a serious relationship right now is just too much to take on," a source told the website. "It’s been a weird few weeks for Selena. She’s tired of taking on other people’s dramas and just wants to continue focusing on herself and going to church is a big part of that. She knows the paps will be there and make a whole thing of her and Justin having a ‘run-in,’ but it’s not like that, they’re fine."

If this Jelena source is to be believed, it sounds like Selena is making the very healthy choice to focus on herself for now.

“Honestly, it’s their friends who don’t really know how to handle the whole situation," the source added. "Everyone’s always guessing, ‘Are they or aren’t they [together]?' They’ve had a very volatile relationship in the past, so everyone is bracing themselves for it to turn south again, but so far it’s been fine.”

This is fair though because our friends worry about us and Justin and Selena's past has given friends and family members a lot to worry about. For the time being, however, it appears as though they are just church friends.

“They were at church last night, they didn’t arrive or leave together, but they were very friendly and civil," the source said. "They’re still very close. It’s not awkward between them at all."

Kayleigh Roberts Contributor Kayleigh Roberts is the weekend editor at Marie Claire, covering celebrity and entertainment news, from actual royals like Kate Middleton and Meghan Markle to Hollywood royalty, like Katie Holmes and Chrissy Teigen.
This content is created and maintained by a third party, and imported onto this page to help users provide their email addresses. You may be able to find more information about this and similar content at piano.io
Advertisement - Continue Reading Below
More From Celebrity
Anna Kendrick Looked Pretty in Pink at a Premiere
John Mulaney & Olivia Munn Might Split Up: Source
Advertisement - Continue Reading Below
The Sussexes Worried Archie Would Attract Mockery
Diana Would Be "Thrilled" for Harry and Meghan
'Friends' Actor James Michael Tyler Has Died at 59
Prince William Mentioned Harry By Name, Finally
Republicans Want Meghan Markle Stripped of Title
Princess Diana Would Be "Horrified" By Portrayals
The Cambridges Head Out on Vacation
Spice Girls Reunion Tour Might Feature Posh Spice