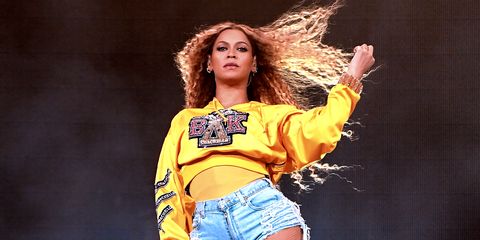 Saturday night, Beyoncé took the stage at Coachella and made history.

"Thank you for allowing me to be the first black woman to headline Coachella," she told the crowd, highlighting just how historic her performance was.

Bey was originally scheduled to headline the annual Indio, California-based music festival last year, but had to back out unexpectedly on doctor's orders when she was pregnant when twins Rumi and Sir. The singer was devastated to have to back out of the performance and promised to headline the 2018 festival instead.

The two-hour, 26-song set was nothing short of incredible and entirely worth the wait. Beyoncé apparently spent the extra year she had to work on it making sure that hers would go down as the very best show in Coachella history—because there is a very good chance that it will.

Just look at the setlist, which included highlights from throughout Bey's career, as well as special, featured appearances by her husband Jay-Z, her sister Solange Knowles, and her former Destiny's Child bandmates:

If you missed the live-stream of Queen Bey ruling over her Coachella kingdom (or just want to relive it, which, understandable), catch up on the highlights below: