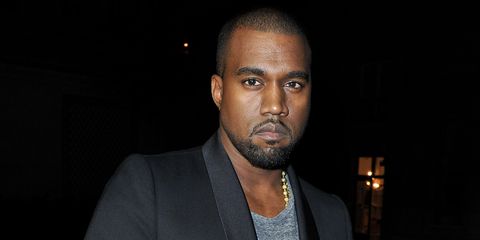 In May 2017, Kanye West mysteriously disappeared from Twitter and Instagram and has kept a relatively low public profile ever since (at least compared to his life pre-social media break). On Sunday night, the rapper returned to Twitter, posting a series of tweets to mark his return.

His first tweet back after almost a year of Twitter silence? A picture of his favorite Saint Pablo tee.

Next, Kanye invited his fans to a caption contest:

His third tweet back was especially interesting though. The rapper shared a picture of himself and sister-in-law Khloé Kardashian's ex-husband, Lamar Odom. "[M]y favorite moment of walking into MSG to play Saint Pablo, I used to go to the hospital and play Lamar the album when he was learning to walk and talk again Then we walked into the arena together," he wrote along with the picture.

Could this be a subtle reference to the drama between Khloé and her current boyfriend, Tristan Thompson?

Kanye then mused about consciousness, as you do:

And some potential designs for a new neck tattoo of his son Saint West's name. Option one was designed by an unnamed friend in a wavy font.

Option two is simpler and features only Saint's first name.

Kayleigh Roberts Contributor Kayleigh Roberts is the weekend editor at Marie Claire, covering celebrity and entertainment news, from actual royals like Kate Middleton and Meghan Markle to Hollywood royalty, like Katie Holmes and Chrissy Teigen.
This content is created and maintained by a third party, and imported onto this page to help users provide their email addresses. You may be able to find more information about this and similar content at piano.io
Advertisement - Continue Reading Below
More From Celebrity
Zac Efron and His GF Have Reportedly Split
Laverne Cox Was Targeted in a Transphobic Attack
Advertisement - Continue Reading Below
Chrissy Teigen Opened Up About Recovery After Loss
Ryan and Blake Donated to Support Homeless Youth
Chrissy Teigen Shared Her Breastfeeding Struggles
The Royals Refused to Fact Check 'The Crown'
Charles' Friend Says 'The Crown' Is Propaganda
Peacock Apologizes for Selena Gomez Kidney Joke
Jessica Mulroney Says Meghan FaceTimes Her A Lot
Kate Might Be Wearing This Gucci Blouse Backwards