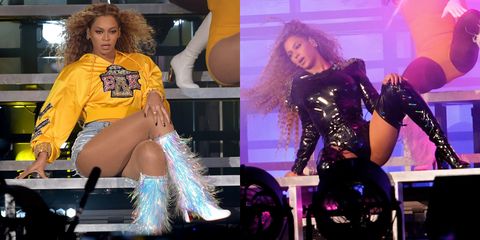 On Saturday night, Beyoncé took the stage at Coachella for her highly-anticipated headlining performance and left the world in awe. She won Coachella, probably forever, and out-Beyed herself on a level that barely seems humanly possible.

Beyoncé was originally scheduled to headline Coachella in 2017, but her pregnancy with twins Rumi and Sir made that impossible (her doctor strongly advised her to cancel the appearance and put her health first, which was 100 percent the right thing to do). Never one to disappoint her fans, Bey promised to headline the 2018 festival instead and when she did, the event was transformed into #BeyChella.

During her epic, two-hour set, Beyoncé performed songs spanning her entire career, including duets with husband Jay-Z, sister Solange Knowles, and her former bandmates from Destiny's Child. She also made history as the first black woman to headline the annual Indio, California music festival.

"Thank you for allowing me to be the first black woman to headline Coachella," she told the crowd.

The point is that Beyoncé took our already sky-high expectations of what a Beyoncé performance can be, crushed them, and did it all with a smile.

During the show, Queen Bey performed an incredible 26 songs and did several costume changes, but some eagle-eyed fans noticed that she also somehow found time to change her nails between songs too.

Fans took to Twitter to express their genuine awe and disbelief, because this is magic and might be proof that Beyoncé actually has the power to stop time.

SHE CHANGED HER NAILS?! I AM DONE. FINISHED. OVER. BEYOND. https://t.co/Nsabq8QBMw

How? Like, actually, HOW? Tell us your ways, Beyoncé. Please?