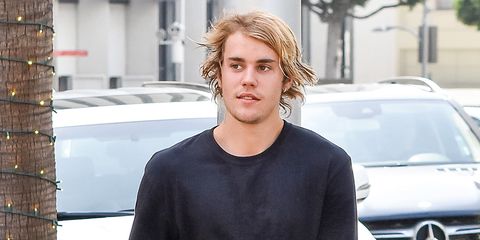 Justin Bieber got into a physical altercation with another man at a Coachella party, according to TMZ. The website reports that Bieber punched a man in the face and then threw him into a wall after the singer witnessed the man grabbing a woman by the throat and refusing to let go.

The alleged incident went down at a party Bieber was attending with his close friend, actor Patrick Schwarzenneger. Sources who were at the party say the man walked in, saw the woman (who some say appeared to be his ex-girlfriend), and "went ballistic."

Per TMZ: "Justin and his friend started screaming at the guy to let her go, but he only screamed back 'Go f*ck yourself'...maintaining his grip. At that point, Justin hit the man in the face and pushed him against the wall...allowing the woman to break free."

The La Quinta Police Department told People that the woman said Bieber was “involved in this incident," but added that no other witnesses have given statements confirming the singer's involvement in the incident.

“Investigating officers responded to the residence where the alleged battery occurred but were unable to locate any witnesses or evidence of a battery," the police said in a statement. "[The woman] declined to press charges for the alleged battery and had no visible injuries at the time of police contact," they added.

He also posted a picture of himself cuddling with a mystery woman on Instagram captioned "Coachella moments."

Clearly, it's been a busy weekend for Bieber.

Kayleigh Roberts Contributor Kayleigh Roberts is the weekend editor at Marie Claire, covering celebrity and entertainment news, from actual royals like Kate Middleton and Meghan Markle to Hollywood royalty, like Katie Holmes and Chrissy Teigen.
This content is created and maintained by a third party, and imported onto this page to help users provide their email addresses. You may be able to find more information about this and similar content at piano.io
Advertisement - Continue Reading Below
More From Guide to Coachella 2020
Kylie Jenner's Adorned Braid for Coachella
How to Watch Coachella 2019 Live
Advertisement - Continue Reading Below
Why Solange Isn't Performing at Coachella Anymore
The Best Street Style From Coachella 2018
All the Celebrities at Coachella This Year
The 5 Coolest Beauty Trends at Coachella
How to Create Coachella Braids in Four Easy Steps
Rihanna Looks Unrecognizable at Coachella
Leonardo DiCaprio Saw Coachella in 3D
Kylie Jenner Debuts Denim Blue Coachella Hair