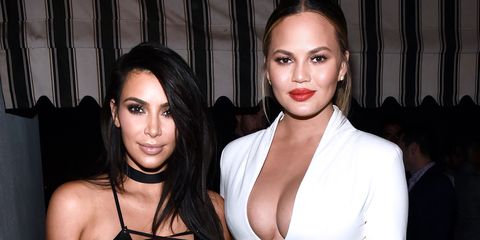 Kim Kardashian and Chrissy Teigen have an amazing and hilarious friendship. And Tuesday night, they were you and your funniest friend sharing an extended, public joke on Twitter.

Like so many things, it started with Kanye West. Tuesday morning, Kanye tweeted about his need to purge:

Sometimes you have to get rid of everything

Kim responded with some light, friendly trolling of her husband, tweeting, "Wait...EVERYTHING?!?!?!"

Chrissy Teigen immediately chimed in, offering up her air mattress, if Kim needed it.

Kim then joked that she might need more space for the kids because she wasn't sure if the whole family was included in the "everything" Kanye was planning to purge. She even suggested that maybe Chrissy's husband, John Legend, could try calling Kanye for some clarity.

Might need some more for the kids? Just not clear on what everything really means. I need clarity. Thanks for being such a good friend. Maybe John can call and inquire? But maybe he means friends too? This is confusing. https://t.co/HLUkMiZCLU

Chrissy, ever the problem-solver, offered up a bouncy house for the whole Kardashian-West family (or, you know, at least Kim and the kids in this hypothetical, totally-joking scenario where Kanye West gets rid of them—which is obviously not happening).

"You’re right," she tweeted. "We are all screwed. I still have the bouncy house from Saturday!! it’s a bed and a house in one."

you’re right. we are all screwed. I still have the bouncy house from Saturday!! it’s a bed and a house in one

Because Kim lives the kind of public life where this is an issue, she followed up the exchange with a tweet clarifying that it was all a joke—you know, just in case anyone thought maybe she actually was moments away from being homeless and living in a bouncy house in Chrissy Teigen's backyard.

For anyone who has absolutely no humor in their soul please know my tweets are a joke and I will die laughing if I see blogs and media really think I am being serious. So don’t even try it.

"For anyone who has absolutely no humor in their soul please know my tweets are a joke and I will die laughing if I see blogs and media really think I am being serious. So don’t even try it," she tweeted.

Don't worry, Kim—we know it was all a joke and it was a completely hilarious one.