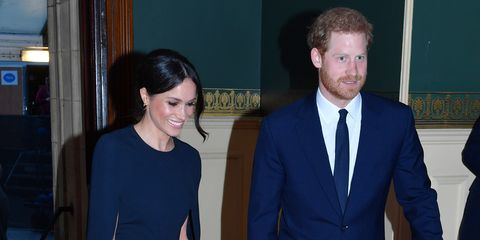 What do you get for the beloved monarch who has everything? How about a star-studded concert? That could work. And that's exactly what London is doing for its own beloved monarch/birthday girl, Queen Elizabeth II.

Tonight, in honor of the Queen's 92nd birthday, Royal Albert Hall in London hosted a massive concert event. Takeaway: Queens don't do low-key birthdays, in case you were wondering:

While the very-pregnant, due-any-day-now Kate Middleton was, understandably, not able to make it, Elizabeth's grandsons, Prince William and Prince Harry made a point of coming out for the big night. Also in attendance? Harry's fiancée, Meghan Markle, who is clearly already a part of the royal family, even though her wedding is still close to a month away.

The Duke of Cambridge, Prince Harry and Ms. Markle stand for the arrival of Her Majesty for the #queensbirthday concert at the @RoyalAlbertHall. pic.twitter.com/mVOhSUi64B

In pictures posted to Twitter by Kensington Palace, the Queen can be seen wearing a spectacular gold dress.

Meghan, on the other hand, opted for a look that managed to perfectly straddle the line between demure and daring. The navy blue, crew neck dress by English fashion designer Stella McCartney. The daring part? The dress has a cape. Meghan completed the look with navy, suede Manolo Blahnik pumps and a Leo Zodiac clutch by Naeem Khan.

According to a post on Kensington Palace's Instagram Stories (what a very 2018 sentence), Prince Charles and his wife, Camilla, also joined the Queen at her birthday concert, making it a true family affair.

The concert boasted performances by some of the biggest names in music, including Sting and Shaggy. Only the best for Her Majesty.

For those not lucky enough to secure tickets to watch the concert live, the event is being broadcast live on @BBCOne and @BBCRadio2.

Kayleigh Roberts Contributor Kayleigh Roberts is the weekend editor at Marie Claire, covering celebrity and entertainment news, from actual royals like Kate Middleton and Meghan Markle to Hollywood royalty, like Katie Holmes and Chrissy Teigen.
This content is created and maintained by a third party, and imported onto this page to help users provide their email addresses. You may be able to find more information about this and similar content at piano.io
Advertisement - Continue Reading Below
More From The Ultimate Guide to the Royal Family
Rare Photos From Diana and Charles' Wedding
Prince George Looks So Grown-Up in New Portrait
Advertisement - Continue Reading Below
Whatever Happened to Archewell Audio?
Prince Harry Is Set to Publish a Memoir
For Prince George Turning 8 Is a Fashion Milestone
Queen & Philip Made a Pact Not to Mourn Too Long
Diana Was Traumatized by Something Charles Said
Charlotte Will Miss George at Boarding School
Harry & Meghan Want Queen at Lili's Christening
The Queen Wore a Brooch With a Diana Connection