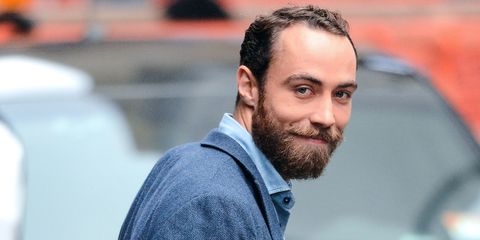 When it comes to Kate Middleton's family, most of the public's attention is laser-focused on her younger sister, Pippa. But there's a third Middleton sibling—the youngest, James, 31. Here's everything you need to know about Kate and Pippa's baby brother.

He was very protective of Kate when she was dating William.

When he was in school and news of Kate and William's relationship started to dominate the press, James would go to extremes to minimize the gossip about his big sister.

"I used to be first up in the morning to make sure I could get to the papers and rip out any stories about my sister, so nobody would see them and there would be no conversations about them," he told the Daily Mail.

Like Kate and Pippa, James grew up in Bucklebury, Berkshire, and attended Marlborough College, a prestigious boarding school in Marlborough, England. Later, he attended Edinburgh University—but not for long.

He knew school wasn't for him.

The youngest Middleton dropped out of Edinburgh after just one year, having never been the academic type. James, who is dyslexic, has been open about his struggles.

"I was fine with numbers but it took me a longer time to grasp simple things like spellings," he said, speaking to the British Dyslexia Association. "I used to spell everything phonetically, or I would have little tricks for words I could not figure out."

He hasn't let dyslexia hinder his ambitions though. James started a company when he left school.

"I knew that that mouthful of academic prescription was not going to do it for me," he told GQ. "My dream, which came to me when I was flying back up to Edinburgh after a weekend home, was to build a cake empire."

His companies have focused on sweets.

James is a business mogul. He ran the Cake Kit Company, which specialized in easy-to-follow at-home baking kits that came with the ingredients pre-measured and simple instructions. His company even created cakes for the likes of Jigsaw and Ralph Lauren.

"I believe baking may be the most alluring kitchen activity for children," James has said of his love for baking. "I have great childhood memories of my mother baking and I was always a willing participant, especially if it meant I could re-varnish the kitchen floor with treacle!"

"When you see yourself on a marshmallow, or your loved one or your pet, you have a little moment with that little marshmallow. There aren't many products in the world like that," he told The Cut. "I'm very much surrounded by [marshmallows], but I still love them [...] Marshmallows are sort of like an essential candy. They're pillows of sweetness."

His most well known relationship was with TV presenter Donna Air.

James and Donna dated off and on for four years, from 2013 to 2017, before they eventually split.

"We are thinking about where we are going next," he told the Daily Mail in 2016, not long before their split.

Donna, 38, had been previously married and has a 13-year-old daughter, Freya, whom James reportedly got along with well.

"I love Donna very much and Freya is very much part of Donna," James added in the same interview. "I love them both equally."

James and Donna's love story may not be over. In October 2017, a source close to James told The Daily Mail, "James hopes the split will not be permanent."

Royal baby No. 3 will no doubt be showered with love from his Uncle James.

"I just want to be the best uncle possible," he told Good Morning America in November 2014, just months before Princess Charlotte was born. "Like any uncle wants to be, I want to be the cool uncle. The fun uncle. That's what sort of I'll always try and be."

Just two days after Kate and Will's third child was born, James and his mother Carole Middleton, paid a visit to the new addition at Kensington Palace.

He admits it can be frustrating being related to a duchess.

While James obviously loves his family, including his sisters, he does admit that there are times when being related to someone as famous as Kate can be tough.

"Yes, it does get frustrating," he said in 2015, according to Us Weekly. "I work incredibly hard—just like every other person in business and work, and aside from the fact that yes, I am the brother of someone very important, I am, at the end of the day, just James."

Related Story
Pippa Middleton Is Reportedly Pregnant!!
Kayleigh Roberts Contributor Kayleigh Roberts is the weekend editor at Marie Claire, covering celebrity and entertainment news, from actual royals like Kate Middleton and Meghan Markle to Hollywood royalty, like Katie Holmes and Chrissy Teigen.
This content is created and maintained by a third party, and imported onto this page to help users provide their email addresses. You may be able to find more information about this and similar content at piano.io
Advertisement - Continue Reading Below
More From The Ultimate Guide to the Royal Family
How Meghan & Harry Spent Their 2-Year Anniversary
Charlotte Has Two Major Milestones Coming Up
Advertisement - Continue Reading Below
Kate Made a Very Common Shoe Shopping Mistake
The Queen Is Lawyering Up, Apparently
Harry & Meghan Are Still Close to the Queen, TYVM
Archie Inspired Harry and Meghan to Take a Stand
Harry & Meghan Had a Hard Time Leaving Royal Life
See Will & Kate's Note About Prince Philip's Death
Kate Refused to Let George Pet a Marsupial in 2014
Charles Talked Will Out of Dropping Out of College