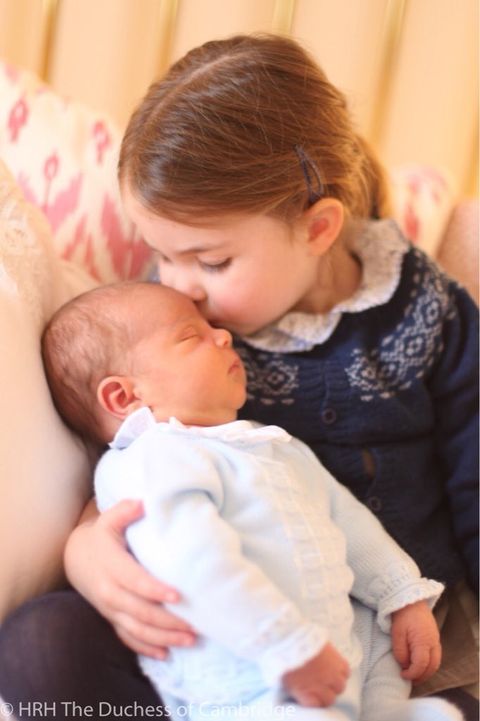 The first photo of the new royal baby is here! Kensington Palace has released the first official picture of Prince Louis just two weeks after his birth AND a photo with his big sister Princess Charlotte:

The Duke and Duchess of Cambridge are very pleased to share two photographs of Princess Charlotte and Prince Louis, taken by The Duchess at Kensington Palace.

This image was taken on 2nd May, on Princess Charlotte’s third Birthday. pic.twitter.com/H5VVgIwRGp

The photos were taken on May 2 (Princess Charlotte’s birthday) by Louis and Charlotte’s mother, Kate Middleton. No traces of Prince George in the photos unfortunately (was he at school? Having a bad hair day? Letting his siblings share the spotlight in honor of their birthdays?), but we’ll surely get new photos of George AND Charlotte at their Uncle Prince Harry’s wedding in two weeks.

The Duke and Duchess of Cambridge have traditionally released official portraits of their new children shortly after their births.

In August 2013, the couple shared this photo of their new family of three (plus their dog, Lupo) taken by new grandfather (and Kate's dad) Michael Middleton:

After Charlotte's birth in 2015, Kate Middleton shared this photo of Princess Charlotte with her brother, George:

Getty Images
Sally Holmes Editor in Chief Sally is the Editor in Chief of Marie Claire where she oversees coverage of all the things the Marie Claire reader wants to know about, including politics, beauty, fashion, and celebs.
This content is created and maintained by a third party, and imported onto this page to help users provide their email addresses. You may be able to find more information about this and similar content at piano.io
Advertisement - Continue Reading Below
More From Celebrity
Ariana Grande Got Married Over the Weekend
Ariana Grande Quietly Married Dalton Gomez
Advertisement - Continue Reading Below
Joie de Tracee
Jennifer Lopez and Ben Affleck: Everything We Know
Harry & Oprah's Mental Health Doc Has a Title
Serena Williams Might Miss the Tokyo Olympics
Jennifer and Ben Have "Unreal" Chemistry Together
The Sussexes Marked Archie's Bday in a Lovely Way
Queen's Cousin Accused of Selling Access to Putin
Meghan Wore a Meaningful Necklace for Vax Live