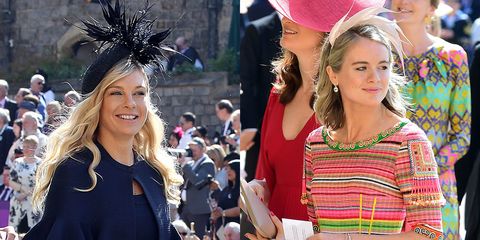 When Prince Harry and Meghan Markle tied the knot yesterday, 600 people watched in person and millions more tuned in from around the world. Among the 600 guests in attendance were two people who you might not have expected: Harry's ex-girlfriends Chelsy Davy and Cressida Bonas.

While most people aren't exactly jumping to invite their ex-loves to bear witness as they marry their OTP, Harry is not most people.

Harry reportedly ended on good terms with both Davy and Bonas (reports that seem to be confirmed by their willing attendance at his wedding).

He dated Davy off and on for several years in his early twenties until splitting for good in 2011. He and Bonas dated for two years and split in 2014. Both relationships were said to have ended because the women involved didn't like the attention and, to be honest, constant harassment and scrutiny that can come with dating a royal.

Not only did Harry end the relationships on good terms, but he still runs in similar social circles with his exes, People reports.

Bonas is close friends with Harry's cousin, Princess Eugenie and, in 2015, Harry was was spotted in the audience of plays Bonas performed in—more than a year after their breakup. As for Davy, she was quoted in June 2016, shortly before Harry and Meghan started dating, as saying they had stayed close and always would.

“I think we will always be good friends,” she told The Sunday Times style section.

People also notes that it's not exactly odd for royals to invite their exes to their weddings. Prince William invited five ex-girlfriends to his 2011 wedding to Kate Middleton and Prince Charles invited two exes to his wedding to Princess Diana—his now-wife, Camilla, Duchess of Cornwall and Lady Sarah McCorquodale (who also happened to be the bride’s sister).

Kayleigh Roberts Contributor Kayleigh Roberts is the weekend editor at Marie Claire, covering celebrity and entertainment news, from actual royals like Kate Middleton and Meghan Markle to Hollywood royalty, like Katie Holmes and Chrissy Teigen.
This content is created and maintained by a third party, and imported onto this page to help users provide their email addresses. You may be able to find more information about this and similar content at piano.io
Advertisement - Continue Reading Below
More From The Ultimate Guide to the Royal Family
Why Harry's Memoir Release Date Has Upset People
The Royals Are Worried About Prince Harry's Memoir
Advertisement - Continue Reading Below
Harry Is Putting the Queen in a Difficult Position
Are Will & Kate Sending a Message to Harry & Meg?
Harry and Meghan Reportedly Have a Four-Book Deal
Rare Photos From Diana and Charles' Wedding
Prince George Looks So Grown-Up in New Portrait
Whatever Happened to Archewell Audio?
Prince Harry Is Set to Publish a Memoir
For Prince George Turning 8 Is a Fashion Milestone