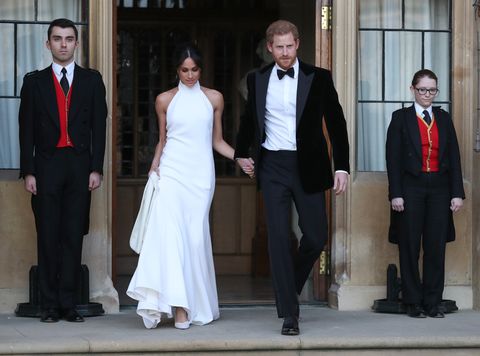 Prince Harry and Meghan Markle walked down the aisle on May 19 looking absolutely stunning in every way. The couple decided to start their lives together on a healthy note and sources close to them say Harry has Meghan to thank for his own transformation.

"Meghan is a beautiful influence on Harry,” an insider told People. "They both worked hard to be the healthiest they could be before they got married."

The source says Harry and Meghan worked with Gabriela Peacock, the founder of GP Nutrition, who advises the royal family on nutrition. Harry is reportedly a fan of Peacock's Clean Me supplements.

"Meghan encouraged Harry to get rid of any remnants of his party lifestyle," the source said. "She wanted him to get in shape and be healthy."

The Duke and Duchess of Sussex would like to thank everyone who took part in the celebrations of their wedding on Saturday. They feel so lucky to have been able to share their day with all those gathered in Windsor and also all those who watched the wedding on television across the UK, Commonwealth, and around the world #RoyalWedding

Meghan's influence apparently rubbed off on her royal husband in a big way. According to the source, Harry has made some truly incredible lifestyle changes since settling down with Meghan.

"Harry has lost weight, started a healthier diet and even gave up smoking cigarettes," a source told People. "They both felt amazing leading up to the wedding. And he couldn’t have done it without her support."

Reports of Harry's diet and lifestyle changes came out before the wedding as well.

In April, The Daily Mail reported that Harry had been "following his fiancée’s love of 'clean eating'" and had lost more than seven pounds leading up to the wedding.

According to a Daily Mail source, the prince swapped carbs and processed foods for "kale and quinoa" in his daily meals. Again, all the credit went to Meghan. "Meghan has completely changed Harry’s diet," the source told Daily Mail. "She's got him juicing and he has lost at least half a stone, which is a lot for someone as skinny as he is."