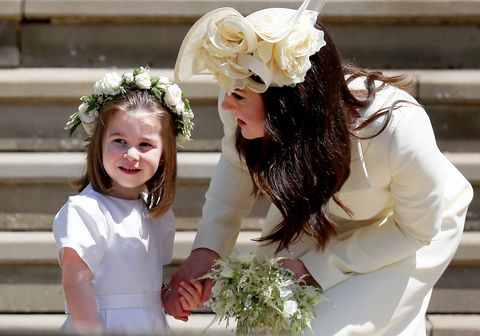 Being in the royal family means adhering to a lot of protocols and rules—even for the youngest members of the family.

According to Harpers Bazaar Australia, Kate Middleton and Prince William's children, Prince George and Princess Charlotte aren't allowed to sit at the dinner table with their parents during royal visits until they have learned the "art of polite conversation." This rule will presumably also apply to Prince Louis when he's old enough to, you know, sit at a table.

Anyone who has ever been banished to the kiddie table knows their strife. Little royals have to sit away from their parents until they're mature enough to behave themselves like the grownups, which is a lot of pressure to put on kids.

This isn't the only royal requirement already on George and Charlotte's plates. Earlier this year, People reported that the royal kids are required to learn more than one language and that Princess Charlotte is already learning Spanish. Reminder: She's three. The reason for the second language makes sense though—Charlotte's nanny, Maria Teresa Turrion, is a native Spanish speaker.

Prince George is subject to royal rules of his own. The young prince is only allowed to wear shorts in public until he's eight years old, as part of a longstanding royal tradition. He was allowed a rare exception at his uncle's wedding last month, where he wore pants as part of his pageboy outfit.

Oh, the life of the royals.