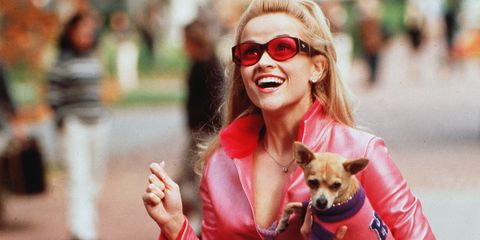 Here's something that makes us ridiculously happy: Legally Blonde 3 is officially a go. Although rumors popped up last summer that O.G. Elle Woods, Reese Witherspoon, was in talks with MGM about a possible threequel, the actress finally confirmed last year in an hilarious throwback tweet.

It's been 17 years since Legally Blonde hit theaters, and although we got a glimpse of Elle Woods' future in the 2003 sequel, we're anxiously awaiting to find out where our favorite Gemini vegetarian ends up next.

So what can we expect from the threequel? Here's what we know:

Is Reese Witherspoon reprising her role as Elle Woods?

Witherspoon's tweet confirming the third film was short, funny, and had a clear message: LB3 is a go, and Elle Woods is our star once again.

The quick video shows Witherspoon drifting across her pool in the ultimate Elle Woods-pink bikini, complete with the caption, "It's true...#LegallyBlonde3." Unsurprisingly people started freaking out, responding to the tweet with a slew of "bend and snap" gifs.


Will Luke Wilson come back in Legally Blonde 3?

Unclear, but we know he wants to! In February, the man who stole Elle's heart in the original Legally Blonde told ET Online that he was definitely down to show up for the third movie. (And can you blame him? It's a sequel to one of the funniest rom-coms in history.)

He told the site, "I can't imagine anything that would be more fun. Reese played such a great character. I'd love to do a Legally Blonde 3."

Get the gang back together!

Have they started filming it yet?

Unfortunately, we now know that they haven't gotten that far yet.

At a Big Little Lies season 2 even in New York, Witherspoon told ET Online that she was "having a great time" working on the film, and then revealed where the sequel stands right now. "[We have] a script, but we haven't shot anything," she told the outlet.

So no spoilers available yet, sadly.

When is the release date?

Legally Blonde 3 has an official release date: February 14, 2020. The news come from Deadline, who broke it on June 7. Hey, so now you know what your Valentine's Day plans are for next year!