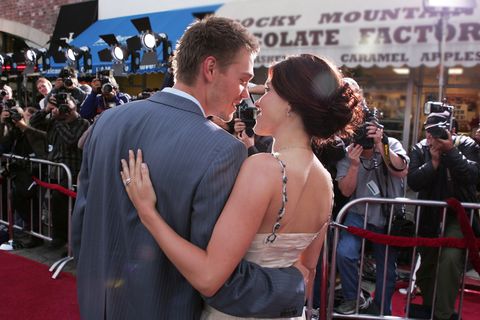 The nostalgia is real, folks: 13 years after Chad Michael Murray and Sophia Bush called it quits on their 5-month-long marriage, the actors still have a lot to say about each other. The latest: Murray "doesn't feel the need to engage in this type of behavior," according to his rep, referencing Bush's comments earlier this week that she had felt pressured into marrying Murray back in 2005.

It all started when Bush sat down with Andy Cohen on SiriusXM Radio Andy and shared some insight as to what really went down when the One Tree Hill co-stars tied the knot. Of getting married, Bush told Cohen: "And it was not a thing I actually really wanted to do ... Ladies have to learn how to take up space in the way that men are taught they are entitled to."

When Cohen asked why a then 22-year-old Bush would feel pressured into marriage, she added, “Because how do you let everybody down? And how do you, what’s the fight? And when you have bosses telling you that you’re the only person who gets a person to work on time and 200 people either get to either see their kids at night or they don’t because our days start on time?”

Related Stories
Are Justin Bieber and Hailey Baldwin Back On?
A Full Timeline of Ariana Grande and Pete Davidson

She added: "Life is always loaded. What the public knows ever is never—it’s not the tip of the iceberg. Hilarie [Burton] and I used to laugh and we were like, 'If we had a behind-the-scenes show, the drama would be so much fucking better than the drama that the writers write.'"

Murray's take on the situation? Welp, it was a little different. In a statement given to People by the actor's rep, he's calling B.S.—apparently the story is "ludicrous."

“Chad conducts himself in a completely professional manner and would never marry for any reason but love,” says the rep. “Thirteen years since his divorce from Sophia, he has a very happy family life with his wife and children. He has completely moved on and doesn’t feel the need to engage in this type of behavior.”

Just me, or is there a touch of additional shade in the part about how Chad is remarried? (Sophia is happily single.)

TBD on Bush's response—we'll be over here feeling all the nostalgic feels in the meantime.

Related Story
Priyanka Chopra and Nick Jonas Went To A Wedding
Ruby Buddemeyer Beauty Editor Ruby is the beauty editor at Cosmopolitan, where she covers beauty across print and digital.
Advertisement - Continue Reading Below
More From Celebrity
Why Isn't Beyonce at the 2020 Grammys?
Watch Demi Lovato's Emotional Grammys Performance
Advertisement - Continue Reading Below
Beyoncé's Pre-Grammys Look
Blake and Gwen Were Too Cute at the Grammys
The Jonas Brothers' Grammys Performance Was a Lot
Alicia Keys Covers 'Someone You Loved'
Lizzo Opens the Grammys With an Epic Performance
Chrissy and John Win Best Dressed at the Grammys
Sophie Turner Stuns In a Gothic Look
Ariana Grande Is a Disney Princess at the Grammys