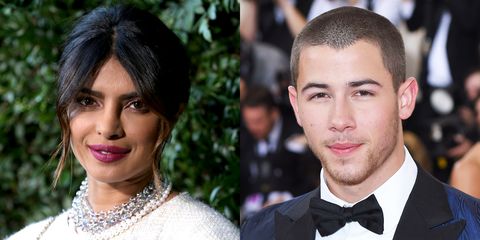 Remember when Nick Jonas and Priyanka Chopra were spotted at JFK airport in NYC last week, looking just like a legit couple? Get ready to feel all the feels: Turns out the duo were on their way to a family wedding—which means Chopra and Jonas are, like, 100 percent a thing.

Over the weekend, Jonas took Chopra as his date to his cousin's wedding. While neither party has uploaded any photos themselves, the receipts courtesy of the Daily Mail look pretty damn convincing (and Chopra in a mustard-yellow dress cozied up to Jonas is everything our Monday slump needed).

Chopra and Jonas first sparked dating rumors when they walked the 2017 Met Gala red carpet together. While they originally claimed to be just friends, Chopra and Jonas have spent the last month looking quite couple-y: They reportedly spent Memorial Day Weekend together and were later spotted at a Los Angeles Dodgers game. Plus, the two have been leaving uber-flirty comments on each other's Instagram pics:

When a continent comes for your man. #CommentsByCelebs

TBD whether Chopra and Jonas will confirm their relationship in the near future—our hearts can't handle the suspense much longer.