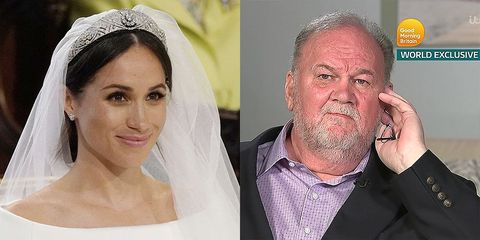 Speaking publicly for the first time about not attending the royal wedding, Meghan Markle’s father Thomas Markle Sr. has admitted that he cried while watching her walk down the aisle from his couch.

In a new interview with Good Morning Britain on Monday, Mr. Markle opened up about how he was upset to miss his daughter’s big day, and how he instantly regretted his decision to turn down being a part of it.

WORLD EXCLUSIVE: Thomas Markle talks about his heart surgery and the moment he told Meghan he couldn’t attend the royal wedding #GMB pic.twitter.com/oIpPjPbd6u

Remembering the moment that he watched Meghan tie the knot with Prince Harry on screen with the rest of the world, her father said: "She was beautiful. I cried a little watching her.

"I was very proud and I couldn't see a better moment in my life. The whole world was watching my daughter."

Just two days before the wedding, Meghan confirmed in a heartfelt statement that her father would not be be present to talk her down the aisle due to health reasons, and Markle has now admitted that his decision to keep away from Windsor is one that he deeply regrets.

“The unfortunate thing now is that I'm a footnote in one of the greatest moments in history,” he said sadly. “Instead of a dad walking his daughter down the aisle.

"It was a very emotional moment. I regretted it because I really wanted to walk her down the aisle. But I'm thankful for how it all went."

WORLD EXCLUSIVE: Thomas Markle says he feels like a 'footnote in one of the greatest moments in history' after he was unable to attend his daughter's wedding to Prince Harry.

Luckily, Markle was more than happy to have the groom's father, Prince Charles, on hand to take over his duties at the last minute.

"Charles–how could I have asked for a better replacement?" Mr. Markle said. "I was thrilled to tears that he was doing that for me. I just wish it had been my hand holding my daughter, not his.”

Getty Images
Lucy Wood Contributor, MarieClaire.com Lucy Wood spends most of her time writing about celebby things, reading books, and waiting for the glorious day that she have enough millions for a pet sloth.
Advertisement - Continue Reading Below
More From Celebrity
Kate and Meghan Are Glowing In Massimo Dutti
The Jonas Brothers Remade a Scene from 'Camp Rock'
Advertisement - Continue Reading Below
Harry Doesn't Want 'The Crown' to Cover His Life
Meghan's Emotional Visit to a London Dog Shelter
Taylor Swift's Mom, Andrea, Has a Brain Tumor
Kate Wore a Great Chevron Blouse to UK Event
Brad Pitt and Jennifer Aniston's Pics, Analyzed
58 Celebrities Who Hated Their Roles
Prince Harry Grins as He Returns to Canada
Meghan Markle Went on a Hike With Archie