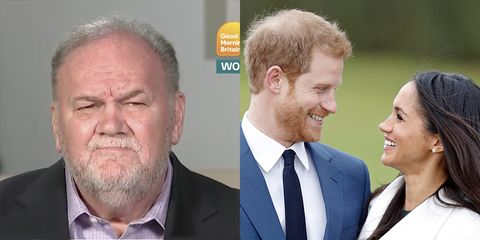 Speaking in a rare interview, Meghan Markle’s father, Thomas Markle, has opened up about his decision to bow out of the royal wedding, as well as his opinions on Prince Harry and his daughter’s relationship.

Speaking to Good Morning Britain about his daughter’s journey to becoming Duchess of Sussex, Thomas even shared the secrets of the moment when Meghan revealed she was casually dating an actual Prince of England.

"The first phone calls were ‘Dad, I have a new boyfriend’,” he shared. “She said 'he's British’ and I said 'that's really nice', and eventually the third time around was like 'he's a Prince.’"

Not sure that such a cool, calm, and collected response would have been my own Dad’s instant reaction, but sure.

Thomas Markle also told host Piers Morgan that his daughter went on to tell him to refer to Prince Harry strictly as 'H' to keep their dating top secret before the relationship was made official. Did Disney Princesses have these problems?

Markle also shared the story of the moment that Harry asked him for permission to marry his daughter.

He told host Piers Morgan: "Harry asked for her hand on the phone and I said: 'You are a gentleman, promise me you will never raise your hand against my daughter and of course I will grant you my permission'."

'My daughter has been a Princess since the day she was born.'

Thomas Markle, father of the Duchess of Sussex, speaks about the moment he spoke to Prince Harry for the first time in a WORLD EXCLUSIVE interview. pic.twitter.com/yywNJYc1sn

But one reason why Meghan's dad perhaps wasn't all that surprised by the news that his daughter was marrying a prince? He's always known his daughter was a princess. "[Harry's] a very nice man, a gentleman. He's great, he's interesting, he's a prince. But my daughter's been a princess since the day she was born, I don't have a problem with that."

Getty Images
Lucy Wood Contributor, MarieClaire.com Lucy Wood spends most of her time writing about celebby things, reading books, and waiting for the glorious day that she have enough millions for a pet sloth.
This content is created and maintained by a third party, and imported onto this page to help users provide their email addresses. You may be able to find more information about this and similar content at piano.io
Advertisement - Continue Reading Below
More From Celebrity
Meet Simone Biles's Super Supportive Parents
What Happens on Katie's Season?
Advertisement - Continue Reading Below
Bennifer Recreated Their 2002 PDA Moment
Why Harry's Memoir Release Date Has Upset People
The Royals Are Worried About Prince Harry's Memoir
Gabrielle Union Debuted a New, Short Haircut
J.Lo Made Out With Ben on IG for Her 52nd Birthday
Harry Is Putting the Queen in a Difficult Position
Are Will & Kate Sending a Message to Harry & Meg?
Harry and Meghan Reportedly Have a Four-Book Deal