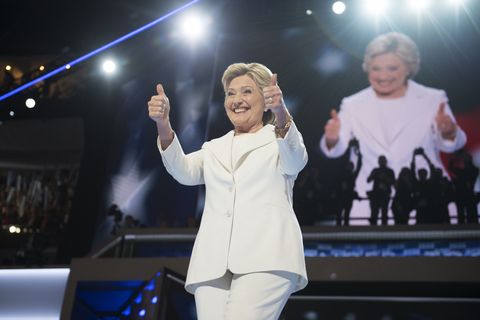 On Thursday, Hillary Clinton gave the speech of a lifetime at the Democratic National Convention (and made way more than a fashion statement in her sleek white pantsuit)—but the Internet can't help itself, and in the midst of the political history-making, it succumbed to its baser desires. Namely: her super-hot nephew, Tyler Clinton.

The model-esque young man was spotted by many as he joined Aunt Hill on stage at the end of the evening to give her a warm hug and chase balloons with Uncle Bill. See, he's the one in the blue tie:

The site WorldofWonder.net did some digging to find out exactly who this smokin' stud of a guy is, and discovered Tyler Clinton is the 18-year-old son of Bill Clinton's half-brother Roger Clinton. They also report that he is a model, and recently graduated from Loyola Marymount University, where his uncle delivered the commencement speech. We're a little unclear on how he is a college graduate at only 18 years of age… so we're guessing he's probably actually a little older than that. Which we're not mad about.

Regardless, Twitter is practically flooded from all the lustful drooling that's happening right now.

Can we have a moment of silence to appreciate the Clintons' nephew, Tyler Clinton. #ImWithHer #ImWithHerAndHim 😯👌 pic.twitter.com/6Z6FTEvilc

Hillary Clinton's nephew Tyler will make you want to vote Democrat ALL THE WAY down the ballot pic.twitter.com/EIXWaNwe6I

In case you want to see more photos of this handsome young Clinton (and you know you do), check out photographer Adina Doria's website here. You're welcome.