This week, Twitter eye-rolled itself into oblivion when it emerged that Scarlett Johansson would take on the role of a transgender man in upcoming biopic Rub & Tug—and the actress responded to the backlash with a tone-deaf statement Wednesday.

Deadline initially broke the news that the Avengers star will controversially play the part of '70s Pittsburgh crime boss Dante "Tex" Gill. Johansson’s questionable decision to take on the role comes just a year after the 2017 adaptation of Ghost In The Shell, which saw her play a famously Asian part and single-handedly spark a huge debate about whitewash casting across the Hollywood movie industry.

In fact, the actress is pairing up with the same director for Rub &. She and Rupert Sanders will work together again for this new movie, telling the “fact-based story” of the transgender massage parlor mogul.

And what could make this whole situation brighter than a thoughtless response? A representative for the actress has now fired out at the backlash, telling Bustle that the complaints aimed at Scarlett are misdirected.

"Tell them that they can be directed to Jeffrey Tambor, Jared Leto, and Felicity Huffman's reps for comment," the spokesperson said in a statement, name-checking other cisgender actors who have played transgender roles. These include Huffman in Transamerica, and Leto's Oscar-winning performance in Dallas Buyers Club.

Unsurprisingly, news of the casting had been met with fury online even before Johansson's tone-deaf response. Critics have blasted Johansson and Sanders for essentially repeating their same ignorance, seemingly undeterred by the reaction to Ghost In The Shell. Ahh yes, let’s follow up our last insensitive lack of representation by popping a cis woman into the role of a transgender man. You got it, guys. 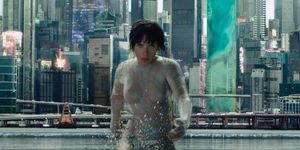