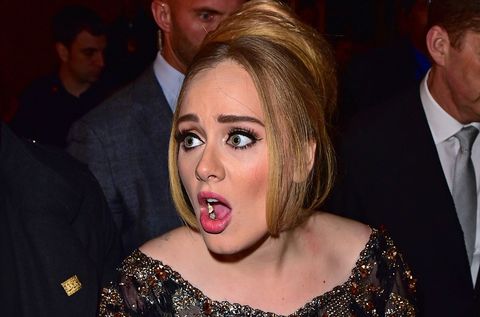 Adele can do literally anything. She can belt out notes we never dreamed of. She can break record after record with her mega-hit songs. She can make us laugh hysterically, just by being herself. And just when we thought Adele couldn't impress us any more, we learned that the Grammy-winner can give up pizza.

It's a feat most mere mortals can't even dream of, but Adele really did it. Refinery29 reports that the incredible singer gave up everyone's favorite food and she did it all for us. Well, kind of. She says she cut pizza from her diet for the good of her singing voice.

No, we can't. We can't get over how dedicated Adele clearly is to her craft.

And speaking of amazing things Adele has said no to recently, she revealed during her August 13 concert in Los Angeles that she turned down an offer to perform in the 2017 Super Bowl halftime show.

"First of all, I'm not doing the Super Bowl," Adele said during the concert. "I mean, come on, that show is not about music. And I don't really—I can't dance or anything like that. They were very kind, they did ask me, but I said no."

Kayleigh Roberts Kayleigh Roberts is the weekend editor at Cosmo, focused on celebrity news and royals.
This content is created and maintained by a third party, and imported onto this page to help users provide their email addresses. You may be able to find more information about this and similar content at piano.io
Advertisement - Continue Reading Below
More From Celebrity
Olivia Munn Doesn't Care About "Settling Down"
These 83 Twitter Accounts Harass Meghan Markle
Advertisement - Continue Reading Below
Adele's Ex Came to a Special Taping of Her Album
Kristen Stewart on a "Spooky" Moment Playing Diana
Travis Covered His Ex' Name With Tattoo for Kourt
Kendall Jenner Wore a Bedazzled Pink Cowboy Hat
Kourtney & Travis Will Def "Have a Baby Together"
Britney Is Done With "Rude, Humiliating" Family
Ben & Jen Are Meeting Up "Whenever Possible"
Anna Kendrick Looked Pretty in Pink at a Premiere