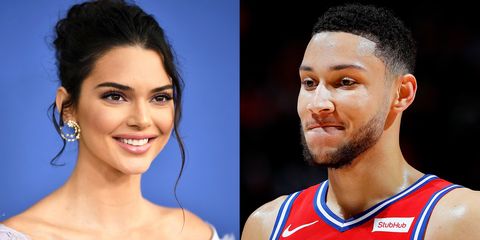 After it was seemingly confirmed that they're very much a thing, Kendall Jenner and rumored boyfriend Ben Simmons can thank Khloé Kardashian for their accidental Instagram debut yesterday. Sorry Anwar, you're out.

Pulling the classic older sister move of ruining your LIFE (*foot stamp, hair flick, storms out of room*), Khloe seemingly outed the Jenner/Simmons relationship yesterday when she shared a video on her Instagram story of the Kardashians’ July 4 party.

Look closely at the crowd hanging out in Khloe’s LA house, and you’ll spot 22-year-old Kendall nestled into 21-year-old Ben on the expensive garden furniture. While it doesn’t exactly confirm that the pair are official, it at least confirms that they’ve reached the snuggling stage, and things are serious enough for Ben to land an invite to the Kardashian-Jenner family gatherings.

It’s probably about the best confirmation that we’ll get for these two, as Jenner is notoriously private when it comes to her dating life and always keeps personal matters close to her chest.

But according to E! News sources, the pair are getting pretty serious. Following reports that Kendall and Ben had joined Khloe and Tristan Thompson for a double date at a private comedy show, an insider said: “Kendall and Ben were inseparable all night and didn't leave each other's side.”

And now look at them, inseparable and side-by-side on an outdoor Kardashian couch. Let’s hope they have actually separated at some point since then, otherwise this is just weird.

If you need more convincing proof than some grainy-ass Insta footage, the most eagle-eyed of fans also spotted a post on the sportsman’s own Instagram story, showing a hand with a neon orange manicure resting on his sneakers. And WHO got a bright orange manicure, MacGyver? That would be Ms Jenner. Case closed.

Related Story
The Style Evolution of Kendall Jenner
Lucy Wood Contributor, MarieClaire.com Lucy Wood spends most of her time writing about celebby things, reading books, and waiting for the glorious day that she have enough millions for a pet sloth.
Advertisement - Continue Reading Below
More From Celebrity
Why Harry and Meghan Should Keep Their Protections
Taylor Swift Explains Why She Loves Joe Alwyn
Advertisement - Continue Reading Below
Real Humans Justin & Jessica Are Going to Therapy
Why the Queen Canceled One of Her Annual Events
Channing Tatum Shuts Down Jessie J Hater on Insta
Celebrities Who Are Mistaken for Other Celebs
Dolly Parton, Icon, Started a Viral Meme
Meghan & Harry's Trademark's Been Blocked for Now
Khloe Kardashian's House Has a Room for Extensions
Katie Holmes Stuns in a White Oversize Coat