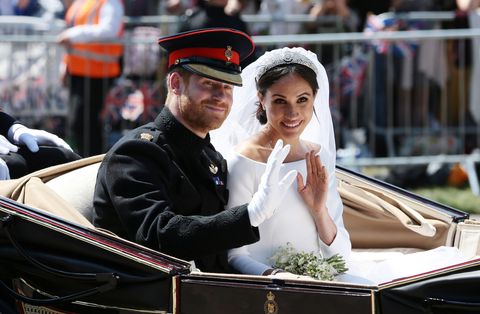 Did you send a wedding card to Prince Harry and Meghan Markle? If you didn't, get ready to really, really wish you had. The Duke and Duchess of Sussex sent out beautiful thank you cards to everyone who reached out to share congratulations about their marriage.

The Instagram account Royal Letters shared the sweet card that Meghan and Harry sent to everyone who sent them notes of congratulations.

The front of the card features a gorgeous and black and white photo of Harry and Meghan on their wedding day at Windsor Castle and, on the back, there's a touching message for their supporters. The back of the card, sent directly from Kensington Palace, reads:

"The Duke and Duchess of Sussex have been overwhelmed by all the incredibly kind cards and letters they have received on the occasion of their Wedding, and are so touched that you took the trouble to write as you did.

"It really was most thoughtful of you and greatly appreciated by Their Royal Highnesses who send you their very best wishes."

The picture featured on the card was taken by Alexi Lubomirski, the photographer who also shot their iconic engagement photos. Instead of a formally posed photo, the couple opted for a more candid shot, snapped in a carefree moment after all the craziness of the day.

"It was just one of those magical moments, when you’re a photographer and everything falls into place," Lubomirski explained to The Sun. "The sun is setting right just over the top of Windsor Castle just behind them, it was just the most serene, beautiful light, they’re in love, walking around this beautiful garden. I said just before you go in, let’s sit down on these stairs, and she just slumped in between his legs. They were just laughing because they were joking about how they were exhausted and finally it was over."