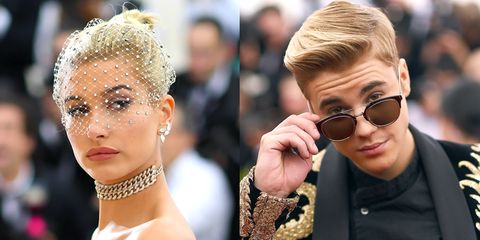 It’s way more than just making out in the Bahamas, cute Instagram posts, and a ring you could skate on. Justin Bieber and Hailey Baldwin’s engagement was written in the stars—or at least a two-year-old magazine article in which the singer predicted that he might marry the model one day.

An old interview with Bieber has surfaced since news broke of the couple’s reported engagement, and it turns out that 21-year-old Justin, now 24, was already thinking about tying the knot with Baldwin one day. The pair have been good friends since their teens, having met for the first time in 2009.

The quotes in GQ magazine from 2016 prove that, despite their seemingly whirlwind relationship, Justin may actually have been playing the long game with Hailey.

He continued: "I know that in the past I've hurt people and said things that I didn't mean to make them happy in the moment. So now I'm just more so looking at the future, making sure I'm not damaging them.

"What if Hailey ends up being the girl I'm gonna marry, right? If I rush into anything, if I damage her, then it's always gonna be damaged. It's really hard to fix wounds like that. It's so hard.… I just don't want to hurt her.”

Well, you can't argue with fate, can you?

View On Instagram
Related Story
Justin Bieber & Hailey Baldwin Reportedly Engaged
Lucy Wood Contributor, MarieClaire.com Lucy Wood spends most of her time writing about celebby things, reading books, and waiting for the glorious day that she have enough millions for a pet sloth.
This content is created and maintained by a third party, and imported onto this page to help users provide their email addresses. You may be able to find more information about this and similar content at piano.io
Advertisement - Continue Reading Below
More From Celebrity
Kaavia Talks to a Bee in an Adorable IG Video
David Harbour on Being Stepdad to Lily Allen's Kid
Advertisement - Continue Reading Below
Ben Affleck Is "Getting to Know" J.Lo's Kids
Salma Hayek's Owl Had a Mishap With Harry Styles
Princess Diana Always Dreamed in Living in Cali
Angelina Jolie Was Spotted Leaving Her Ex's Place
What Happens on Katie's Season?
Ben Affleck Had Dinner With J.Lo and Her Kids
Jessica Biel Talked "Secret COVID Baby" Phineas
Katie Holmes Paired Baggy Jeans With a White Tank