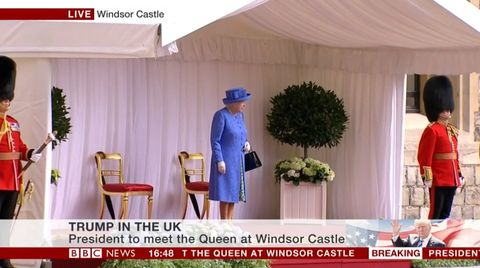 While waiting for guests Donald and Melania Trump to arrive at Windsor Castle today, Queen Elizabeth II was spotted checking her watch, like a very normal, probably hot (it was 80 degrees in Windsor today) queen.

The Trumps were scheduled to meet with the Queen for tea this afternoon at Windsor Castle, but Her Majesty waited (in public and on live TV, no less) for more than 10 minutes. It's unclear whether the Queen was just early for the meet up or the Trumps were actually late, but people on Twitter certainly had feelings about the whole situation.

Oh dear, she just looked at her watch. The Queen does NOT like tardiness. pic.twitter.com/b0GXBV9oWt

Arriving late-ish might make it seem like Trump was very "meh" about his meeting with the Queen, but he's apparently been super excited about it. Mary Jo Jacobi, a former aide to President Ronald Reagan and a member of the George H.W. Bush administration, even called it a lifelong wish of his. No joke.

The Trumps did eventually arrive for the meeting to shake hands with the 92-year-old monarch (who put on a big, polite smile, so perhaps she was amused after all).

But maybe the highlight of the whole thing? When one of Elizabeth's ladies-in-waiting gave Trump a classic "Trump Handshake":

Kayleigh Roberts Contributor Kayleigh Roberts is the weekend editor at Marie Claire, covering celebrity and entertainment news, from actual royals like Kate Middleton and Meghan Markle to Hollywood royalty, like Katie Holmes and Chrissy Teigen.
This content is created and maintained by a third party, and imported onto this page to help users provide their email addresses. You may be able to find more information about this and similar content at piano.io
Advertisement - Continue Reading Below
More From The Ultimate Guide to the Royal Family
Why Harry's Memoir Release Date Has Upset People
The Royals Are Worried About Prince Harry's Memoir
Advertisement - Continue Reading Below
Harry Is Putting the Queen in a Difficult Position
Are Will & Kate Sending a Message to Harry & Meg?
Harry and Meghan Reportedly Have a Four-Book Deal
Rare Photos From Diana and Charles' Wedding
Prince George Looks So Grown-Up in New Portrait
Whatever Happened to Archewell Audio?
Prince Harry Is Set to Publish a Memoir
For Prince George Turning 8 Is a Fashion Milestone