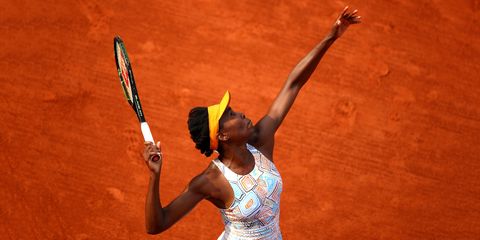 Venus Williams is a powerhouse—and we don't just mean on the court. She manages her own interior design business, has her own clothing line, and fights for female athletes (in 2007, she was the leading charge to have Wimbledon pay the same amount of winnings to all athletes, regardless of gender), all while playing the sport that she and her sister revolutionized for an entire generation—and playing it well. Currently ranked sixth in the world, with five Olympic medals under her belt, and heading to the U.S. Open on August 29 (her 18th!), we caught up with Williams to get the scoop on her new partnership with Amex, that BBC interview gaffe, and sexism in sports.

Marie Claire: You're back from Rio after winning silver in mixed doubles—your fifth Olympic medal, along with 4 golds—what was that energy like?

Venus Williams: Every Olympics is something special. If you're fortunate enough to play for your country—there's just so much energy. It's truly amazing. And this was no different. You go in with that kind of expectation—that you're there to represent and do the best. Hopefully, that comes through and you do.

VW: Yeah, [laughs] everyone has been asking me that! I don't know yet. I'm definitely not against it.

MC: You're partnering with Amex to show fans what it means to "Open like a Pro." How do you get ready for a match?

VW: The thing that's most important in getting you in the best mindest is just being prepared—having a great practice, and knowing that no matter what knowing you're going to go in with confidence. You need to have that confidence to power through.

MC: In one of the videos, you're seen showing off some dance moves—what are your favorite songs to work out to?

VW: Oh man, this is tough. I play the most random things, definitely not the most popular songs. There's this song called Golden...Eye? Golden Girls? that I listen to [laughs] but yeah no set list.

MC: Obviously to do the work that you do, you have to train and workout. What would you say to those who are struggling to hit the gym (AKA me)?

VW: Hah! I would say that working out is work. The most fun part about working out is being done—getting through the workout, let's be honest. But that feeling afterward? Yeah, that's worth it.

"I truly believe that whoever feels the most confident is usually the one to win."

MC: There were recent headlines about a BBC host who asked Andy Murray how it felt to be the first to win two golds in tennis. Murray corrected him, mentioning you and your sister. What was your reaction?

VW: I definitely heard about that, but I haven't seen the actual clip yet, so I'm hesitant to say it was on purpose. I imagine that the reporter made an honest mistake while he was interviewing someone quickly, so I'm not upset about it. But in terms of women's sports and value—we definitely have more growing to do. Honestly, you can only go up when it comes to that perception and I think we're growing exponentially when it comes to respect and awareness.

MC: Now there are other sports teams fighting—recently, for instance, the U.S. Women's National Soccer Team—for fair pay. You lead the charge at Wimbledon nine years ago—what do you think is the biggest or most effective way to affect that change?

VW: The National U.S. Women's Soccer Team—I was overjoyed to hear about that. But yes, there is a lot more work to do and clearly we know this. The thing with Wimbledon—you know, there were women's teams since the 1800s, so getting equal pay? That was a long time coming. So in that respect, we had a head start. I don't know *that* much about other sports' backgrounds but a lot of the women's teams are relatively new, compared to the men's teams. But obviously there should be equal pay. We just have to work together to get there.

As far as getting there? Being organized, having a game plan. That's important. It's about making sure everyone is fairly treated, that everyone is seen as talent.

MC: What are you doing to prepare for the Open?

VW: Really, you just try your best and work on everything you can—you target the areas that you need to and you go in feeling confident. I truly believe that whoever feels the most confident is usually the one to win.

"The thing with Wimbledon—you know, there were women's teams since the 1800s, so getting equal pay? That was a longtime coming."

MC: What's the next goal; something you haven't done yet that you want to?

VW: I feel like I'm living my dream—and off the court with my clothing line EleVen and interior design firm V Starr, so really, I'm happy just living my life right now!

MC: Do you have a mantra?