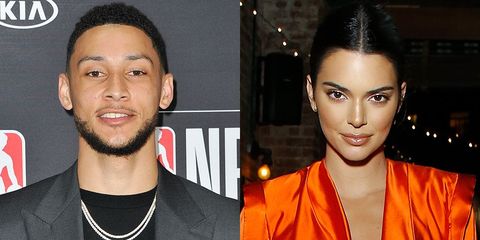 Hitting major milestones in the early days of a relationship is always pretty cute, so three cheers for the blossoming love between Kendall Jenner and rumored boyfriend Ben Simmons, who have just reached the all-important level of "Birthday Dinner Official." In what seems to be the ultimate summer of celebrity romance, the model and basketball player are looking more loved-up than ever in a video taken at Simmons’ party this weekend.

Amid endless rumors that they’re an actual couple now, Kendall was right by Ben’s side (a.k.a., the widely known and respected girlfriend seat) at his birthday celebrations. In a video shared by The Shade Room, Jenner cozies right up to him as he’s presented with an extremely good-looking birthday cake to blow out the candles. And, hey, she’s even singing with surprising amounts of enthusiasm, so you know it must be pretty serious.

Kendall and Ben, both 22, have been spending more and more time together since reports first surfaced that they were privately dating at the end of May. Speculation that things could be getting serious kicked into overdrive earlier this month, when the sports star landed himself an invite to the Kardashian July 4 celebrations at Khloe’s house. Since then, it's also emerged that the couple may have rented a (super luxury, $25,000/month) home together for the summer. Y'know, just the same as you and your Tinder dates.

There’s also the small detail that Kendall was spotted supporting ex Harry Styles at The Forum in Inglewood, California last week, but we’re not in 2013 anymore so that’s probably largely irrelevant.

Getty Images
Related Story
The Style Evolution of Kendall Jenner
Lucy Wood Contributor, MarieClaire.com Lucy Wood spends most of her time writing about celebby things, reading books, and waiting for the glorious day that she have enough millions for a pet sloth.
This content is created and maintained by a third party, and imported onto this page to help users provide their email addresses. You may be able to find more information about this and similar content at piano.io
Advertisement - Continue Reading Below
More From Celebrity
Bennifer Recreated Their 2002 PDA Moment
Why Harry's Memoir Release Date Has Upset People
Advertisement - Continue Reading Below
The Royals Are Worried About Prince Harry's Memoir
Gabrielle Union Debuted a New, Short Haircut
J.Lo Made Out With Ben on IG for Her 52nd Birthday
Harry Is Putting the Queen in a Difficult Position
Are Will & Kate Sending a Message to Harry & Meg?
Harry and Meghan Reportedly Have a Four-Book Deal
Naomi Osaka Lit the Olympic Cauldron in Tokyo
John Legend Performed "Imagine" for the Olympics