Today's Top Stories
1
24 Hours With Diipa Büller-Khosla
2
Get (Financially) Well Soon!
3
The 2021 Book Releases You Don't Want to Miss
4
The Boots Brands Fashion Girls Are Obsessed With
5
This PMD Device Is on Super Sale on Amazon
Chris JacksonGetty Images

While clearly enjoying every second of married life with husband Prince Harry, it’s no secret that Duchess of Sussex, Meghan Markle, has had to deal with her fair share of difficulties since becoming royalty. These difficulties have come directly from her own family, with both father and step-sister constantly hitting headlines for all the wrong reasons. Luckily, Meghan has reportedly found strength, friendship and support from her new family in the form of sister-in-law, Kate Middleton.

If anyone understands how it feels to have your world turned upside down after marrying a Prince, it’s Kate. According to a source at Vanity Fair, the pair have been talking Duchess-to-Duchess about Meghan’s personal matters, and have become firm friends as a result.

“Kate’s well aware of what Meghan is going through," an insider told VF. "Her family has been dragged through the tabloids and she knows it’s not nice. She’s made a big effort to be kind to Meghan and look out for her."

Being dragged through the tabloids is probably the understatement of the century. Just last week, Meghan’s father Thomas Markle publicly told the Daily Mail, among a selection of other delightful comments, that “it would be easier for Meghan if I died.” It’s only one example of the dumpster fire of interviews that he and her half-sister, Samantha Markle, have given about their unravelling relationship with the Duchess, ever since Meghan’s relationship with Harry was first revealed.

Kate, having stepped up as a “pillar of support” through it all, has reportedly been keeping a close eye on Meghan who is apparently “at her wit’s end” with the situation. Just weeks after the Duchesses spent a laughter-filled afternoon at Wimbledon together, the insider continued: “Kate’s made a real effort to be kind to Meghan and to include her. They’re quite different characters but they get along well.”

“They speak on the phone and Kate makes a point of inviting Meghan over,” the source added. “Sometimes with Harry, sometimes Meghan goes on her own. Kate’s really busy juggling three kids; she has a lot on her plate and she has her own friendship group, but she has made an effort with Meghan. She’s been very sympathetic to what’s been going on with Meghan and her dad.”

Shout out to Kate Middleton, the gal pal BFF we all need. 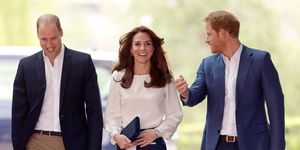 Kate Middleton's 41 Best Casual Looks
Lucy Wood Contributor, MarieClaire.com Lucy Wood spends most of her time writing about celebby things, reading books, and waiting for the glorious day that she have enough millions for a pet sloth.
This content is created and maintained by a third party, and imported onto this page to help users provide their email addresses. You may be able to find more information about this and similar content at piano.io
Advertisement - Continue Reading Below
More From Celebrity
Kate Middleton Borrows The Queen's Fashion Trick
Princes Charle and William "Competing" Over Causes
Advertisement - Continue Reading Below
Lilibet May Be Christened in California After All
The Sweet Family Photos in Prince William's Office
Royal Family Members Can’t Eat Pasta or Potatoes
Prince George Is an Environmentalist, Too
Salma Hayek Looked Super Hot in Leopard Print
Britney Spears Just Trolled Justin Timberlake
Billie Eilish Says Kate and Will Were "So Normal"
Prince William Slammed Billionaires' "Space Race"