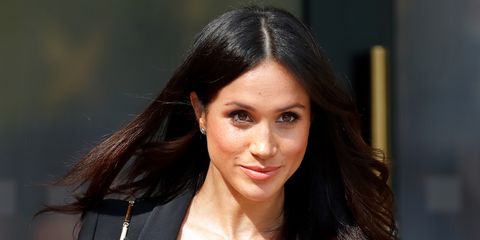 Since becoming a member of the royal family, Meghan Markle has had to make a lot of adjustments and follow a lot of new rules, and, for the most part, she's done a great job. Some members of her family, however, haven't been as on board with her in-laws' PR-friendly rules.

To recap, in case you haven't been following the Markle family drama, there's been a lot. Before the royal wedding, news broke that Meghan's father, Thomas Markle, had staged a series of cute paparazzi photos of him preparing for a trip to the UK. Since the wedding, Thomas has given several interviews, alleging things like that Meghan looks "terrified" by her new life. Now, a friend of Meghan's is even claiming that Thomas faked the heart attack that he said kept him from attending the royal wedding in May. Meghan's half-sister, Samantha Markle, has also gotten in on the public Meghan slamming. It's been a whole thing.

So, how does the Windsor clan plan to address this onslaught of negative press? By taking the high road and not saying anything at all, apparently.

"The strategy at Kensington Palace, I understand, is, 'Say nothing, don't dignify these comments, these interviews, these articles with a response,'" royal expert Katie Nicholl told ET. "The royal family has had more than their fair share of scandals. This won't faze them."

That said, it doesn't seem like Meghan has plans to reach out to mend fences any time soon, either.

"I think the fact that he has continually spoken, he is not respecting her wish that he just stays quiet, [and that] has probably upset her more than anything else and possibly made a reconciliation from Meghan's point of view almost impossible now," Nicholl said. "I don't think there are any concrete plans at the moment for Meghan to go out and see her father. I don't even believe they have spoken on the phone since the day of the royal wedding."

The tension has reportedly been hard on Meghan. A source close to the royal told Us Weekly that she's frustrated by the distance between her and her father and would like to reach out, but worries that her dad would leak any communication they had to the press. She's also reportedly struggling with her inability to issue a comment about the situation—an indication that she might not be totally on board with Kensington Palace's no comment strategy.

"She’s essentially not able to prevent these kind of stories. Now, everything has to go through official Palace," the source said. "She doesn’t have her own publicist, she can’t make any comments on Twitter and she can’t reach out to him to tell him to stop speaking to the press. Her father’s comments have an effect on everything."

Those close to the royal family are confident Meghan can make it through this rough patch, difficult as it might be.

"There's a reason that Prince Charles calls her tungsten. There's a rod of steel that runs through Meghan," Nicholl said. "I think Meghan's strategy is to ride out the storm."

Kayleigh Roberts Contributor Kayleigh Roberts is the weekend editor at Marie Claire, covering celebrity and entertainment news, from actual royals like Kate Middleton and Meghan Markle to Hollywood royalty, like Katie Holmes and Chrissy Teigen.
This content is created and maintained by a third party, and imported onto this page to help users provide their email addresses. You may be able to find more information about this and similar content at piano.io
Advertisement - Continue Reading Below
More From The Ultimate Guide to the Royal Family
Shop Meghan's Stunning $30 Summer Dress
Duchess Kate Wears a Sleek Green Blazer
Advertisement - Continue Reading Below
Meghan & Harry Update Archewell Website
Will Is in the Dark About Sussex/Oprah Interview
Oprah Says Her Sussex Interview Is Her Best Ever
How Kristen Stewart Is Prepping to Play Diana
How to Make the Queen's Favorite Cocktail
The Queen Told Harry to Uphold His Family Values
Twitter Is Thirsting over Prince Harry
Your Guide to the Current Royal Line of Succession