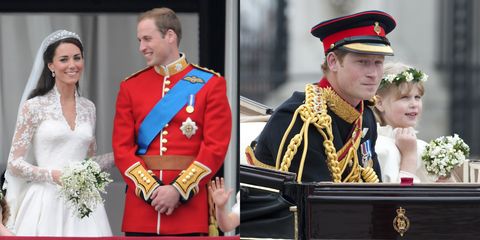 It may not seem like it now, but there was a time before the modern fairytale that is Prince Harry and Meghan Markle's romance. And, like everyone else, Harry has a romantic past. One of his most serious girlfriends was Chelsy Davy, who he dated off and on for seven years and reportedly considered proposing to one point.

The thing that killed Harry and Chelsy's relationship for good? Prince William and Kate Middleton's royal wedding in 2011, which Chelsy attended as Harry's date. There was no blow up fight you missed in the tabloids or anything dramatic like that. The wedding just made Chelsy realize that she couldn't see herself as a royal bride.

According to The Mirror, journalist Angela Levin revealed the reason for Harry and Chelsy's split in her royal biography Harry: Conversations with the Prince.

"A friend revealed that seeing the enormity and pomp of the day convinced Chelsy that she and Harry had been right to separate," she wrote. "Although they had a lot in common, she saw clearly that because they came from such different worlds it could never have worked, especially as she valued her privacy and guarded it so carefully."

While Harry and Chelsy did try one last time to rekindle their romance in 2015, according to royal expert Katie Nicholl's biography of Harry, Will and Kate's wedding was the moment Chelsy felt sure she couldn't take the pressures of the public life of a royal. This makes sense, since Chelsy has been very open about the stress that came with dating Harry in interviews.

"It was so full-on: crazy and scary and uncomfortable," Chelsy said during a June 2016 interview with The Times. "I found it very difficult when it was bad. I couldn’t cope. I was young, I was trying to be a normal kid, and it was horrible."