Back in 2017, royal family fans held their breath as Meghan Markle took on the challenge of giving her first-ever curtsy to the Queen, when she joined Prince Harry, Prince William and Kate Middleton for the Christmas Day celebrations at Sandringham. The now-Duchess of Sussex nailed it—even in heeled boots and a statement hat—and since then, she’s been perfecting the formal royal greeting for her grandmother-in-law.

It’s a good job that Meghan is on her way to becoming a curtsy pro, because in the future she’ll be expected to respectfully bend the knee for other members of the royal family, her brother-in-law Prince William and close friend, Kate Middleton.

Prepare to suddenly feel endlessly grateful that your BFFs are not related to royalty, as Meghan will have to curtsy to her friend Kate in a formal manner that will surely be just a little bit awkward. Once William is on the throne as King, and his wife Kate becomes Queen Consort, the Duke and Duchess of Sussex will be expected to bow and curtsy to them at all formal events as a sign of respect for their new titles and roles in the monarchy.

In fact, even Prince George, Princess Charlotte and Prince Louis will have to eventually bow to their own parents when they lead the monarchy.

It’s thought that Meghan and Kate have become increasingly good friends since the royal wedding—particularly as a result of the difficult drama that Meghan has been facing from her family recently. A source at Vanity Fair recently said: “Kate’s well aware of what Meghan is going through. Her family has been dragged through the tabloids and she knows it’s not nice. She’s made a big effort to be kind to Meghan and look out for her.”

Nothing like starting your Friday night girl time with a pizza, a bottle of rosé and a quick curtsy. 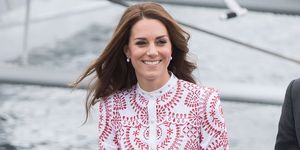